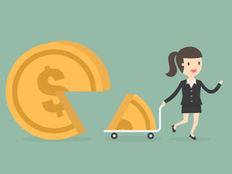 Trending: Bonds Under Pressure as Investors Move to Equities

Stock markets have received mixed signals of late, as bond yields rose across the board while stock prices continued their advance.

Inverse bonds, which benefited from the move to equities, took first place in the trends’ list this week. Wheat ETFs were second as the agricultural commodity is forecasted to have hard times ahead. Regional banks were third, while transportation and financials closed out the list.

Inverse bonds have seen their traffic surge 251% in the past week, the most popular topic by far. Bond yields have been on an upward trajectory of late, as inflation has been accelerating and the benefits from the U.S. tax plan may catch the Federal Reserve on the wrong foot.

In such an environment, inverse bonds, which move in the same direction with yields, are expected to thrive. Already, ProShares Short 20+ Year Treasury (TBF A+) has advanced 2.5% in the past 30 days, a fairly big move for Treasury ETFs. Investors are withdrawing money from bond funds and plowing them into equities, as they see improvements in the bottom lines of many companies given the tax reform. However, some prominent investors, including Bill Gross and Jeffrey Gundlach, are sounding the alarm, suggesting higher yields and falling bond prices will ultimately be negative for the stock market.

The corporate tax comes at a time when the U.S. is already at full employment and the inflation is around the Fed’s target level of 2%. An additional boost may lead to an overheating economy and rising wages and inflation, potentially prompting the Federal Reserve to accelerate the pace of interest rate hikes and causing a recession. That, in turn, will have a negative effect on the stock markets and lead to higher bond yields.

Bond yields may also have suffered of late because the Chinese government said it would not be buying U.S. Treasuries anymore. In addition, because of a strong global economy, Bank of Japan and the European Central Bank are mulling whether to withdraw unprecedented monetary stimulus.

Wheat Falls on Large Plantings in the U.S.

Wheat has taken the second position in the trends’ list this week with a 100% increase in viewership, well below inverse bonds. In the past five days, Teucrium Wheat (WEAT C) has dropped nearly 3%, due to reports of large U.S. plantings across the U.S. The leg down in wheat extended the commodity’s 12-month losses to as much as 20%.

The United States Department of Agriculture (USDA) estimated 32.6 million acres of wheat plantings for the winter 2018 period, considerably above analysts’ expectations of around 30 million acres. Still, the plantings were the lowest since 1909. In addition, stocks of wheat have fallen less than anticipated despite attractive prices, putting additional strains on the embattled commodity.

Somewhat positive news for wheat came from Argentina, where weak precipitation across the country will likely lead to smaller yields than expected.

For a deeper analysis on individual ETF investments such as (WEAT C) or (TBF A+), use our ETF Analyzer Tool. You can select ETFs by category or type as well as add individual ticker symbols to compare performance, expenses and dividend yield, among other metrics.

Regional Banks Poised to Gain in 2018

Regional banks are third in the list this week with a 95% rise in traffic, not far behind wheat ETFs. Unlike traditional banks, regional lenders have underperformed in 2017 but may very well be poised for improved performance in 2018. SPDR S&P Regional Banking (KRE A-) has advanced 12.6% in the past 12 months, underperforming both the S&P 500 (SPY A) and Vanguard Financials (VFH A+) by 7 and 9 percentage points, respectively.

However, higher bond yields coupled with rising interest rates may lead to better performance as regional banks’ bottom lines get fatter. In addition, banks are likely to accelerate the creation of loans thanks to more money available as a result of the tax reform. There is also evidence that the spread between deposit rates and loan rates widened, with banks’ cost of capital still low. In 2018, regional lenders may continue to expand their margins as the Federal Reserve accelerates the pace of interest rate hikes, although credit quality will remain key to the long-term health of the sector.

Transportation ETFs trended in the past week, taking fourth position in the list with a rise in viewership of 83%. SPDR S&P Transportation (XTN A), an ETF containing transportation companies of all kind, including railroads, air carriers and shipping companies, has advanced nearly 2% in the past five days, extending 12-month gains to as much as 24%.

Transportation ETFs are cyclical and benefit from a rising global economy and the surge in global trade, in particular. In 2017, the economy fired on all cylinders, with Europe and emerging markets joining the growth phase along the U.S.

Financials equities took last spot in the list with an advance in viewership of 71%. Similar to regional lenders, financials equities are hot because they are expected to benefit from the impending U.S. tax cuts. Financial Select Sector SPDR Fund (XLF A) has risen nearly 2% in the past five days, extending 12-month gains to 27%.

A rising interest rate environment, along with inflationary pressures, is expected to boost the bottom lines of financial companies; although, a potential recession stemmed from higher interest rates will put a strain on performance.

Investors’ worries about rising bond yields increased this week with inverse bonds trending. Wheat prices continued their downward slide this week on larger-than-expected U.S. plantings. Meanwhile, regional banks and financials are poised to gain in 2018, boosted by a rising interest rate environment and tax cuts in the U.S. Transportation equities are also expected to increase given the strong economy and global trade.