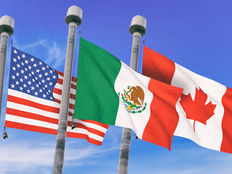 Trending: NAFTA Faces Risk of Crumbling If Deal Is Not Reached

The North American Trade Agreement, also known as NAFTA, may crumble if a deal between the three member countries is not reached in the coming months. Combined with the U.S. government shutdown, the NAFTA debacle put pressure on the U.S. dollar, which took first place in the list.

Canada took second place in the list as the nation’s central bank raised interest rates. Platinum has been on a tear lately, taking third place, while consumer discretionary equities and South Korea close out the list.

Check out our previous trends edition at Trending: Bonds Under Pressure as Investors Move to Equities.

The U.S. dollar had a rocky start to the year as political uncertainty rose. In the past week, the greenback saw its viewership advance as much as 133%.

Killing NAFTA does not seem an implausible scenario given President Donald Trump’s insistence on renegotiating the deal in favor of the U.S.. The round six of negotiations started on January 22, although it is unlikely that the sides will make any progress on a renewed agreement. U.S. President Donald Trump insists on building a wall south of the border and wants better terms for the manufacturing of cars. Both Canada and Mexico believe these are extreme proposals and nonstarters. Another Trump proposal deemed unacceptable by both sides was to renegotiate the agreement every five years with the option of withdrawing from the pact. Such an arrangement may hurt long-term business visibility and lead to fewer investments. In addition, a looming election in Mexico is also forcing the government to delay taking radical decisions on trade until a new administration is installed at the end of the year.

Trump wants a new deal to be renegotiated quickly, but history suggests such major shifts cannot happen overnight. As a result, Trump may become frustrated with the lack of progress and pull the U.S. out of the agreement. Tearing up the accord is expected to have negative consequences on the American economy as around 14 million jobs are linked to trade with Canada and Mexico. The U.S. dollar (UUP B) has lost more than 3% of its value since the start of the year.

Canada has taken second place in the trends list this week with a rise in viewership of 103%. The nation was attractive for investors given the ongoing debacle surrounding NAFTA and the central bank’s decision to hike interest rates.

A string of good news has prompted Canada’s central bank to raise interest rates to 1.25%, although Governor Stephen Poloz cited the potential dismantling of NAFTA as a big risk moving forward. In essence, the central bank suggested that future interest rate hikes will hinge on the progress made by NAFTA negotiators, with the baseline scenario being that the agreement survives.

The central bank may also be a bit more cautious regarding future interest rate hikes given the high household debt, which is the highest in the world. At the same time, the governor faces an overheating housing market.

The central bank expects the economy to slow significantly in 2018 to 2.2% from 3% in the previous year. In 2019, the bank believes the Canadian economy will rise by 1.6%.

If NAFTA falls apart, Canadian exports are sure to suffer a blow given that a third of all exports have the U.S. as their destination. Around half of Canada’s U.S. exports currently benefit from preferential treatment. iShares MSCI Canada ETF (EWC B+) has advanced slightly in the past five days, extending 12-month performance to 13%.

Platinum has seen its traffic rise 86% in the past week thanks to surging precious metal prices. Platinum (PPLT A-) has increased as much as 8% since the beginning of the year due to crumbling NAFTA negotiations and a weak dollar. Despite the impressive advance, (PPLT A-) is still down around 40% compared to its peak reached in 2011 at the height of the global economic crisis.

A weakening U.S. dollar has boosted demand for a host of precious metals, including platinum, gold and silver. At the same time, a rising global economy led to higher demand for industrial uses – platinum is heavily used by the car industry to lower emissions. Around 5% of total demand is for investment purposes, according to industry group The World Platinum Investment Council, which believes the metal’s future is bright thanks to rising demand in China. The council wants to boost the investment part of the demand to 15% of the total.

Consumer discretionary ETFs have seen their traffic rise 78% this week, as a host of ETFs tracking the sector outperformed thanks to Netflix’s abrupt advance. Consumer Discretionary Select Sector SPDR (XLY A) has jumped 2.5% over the past five days, beating the S&P 500 by more than one percentage point. A large part of that gain was driven by Netflix (NFLX), which surged more than 18% after posting strong subscriber growth both in the U.S. and internationally. At present, Netflix makes up 3.7% of (XLY A).

The content streaming company added as many as 6.36 million subscribers internationally in the quarter ended December 31 compared with 5.1 million predicted by Wall Street analysts. In the U.S., the company also posted strong growth, adding nearly 2 million subscribers during the same period. Although its revenues are rising at a quick pace, Netflix continues to burn cash flow at a rate of $2 billion per year. In 2018, the company expects to have a cash deficit of $3 to $4 billion.

For a deeper analysis on individual ETF investments such as (XLY A) or (PPLT A-), use our ETF Analyzer tool. You can select ETFs by category or type as well as add individual ticker symbols to compare performance, expenses and dividend yield, among other metrics.

South Korea took last place in the list with a 48% rise in viewership. The country attracted interest as it continues to battle with rogue neighbor North Korea. In addition, the nation posted a surprise drop of 0.2% in fourth-quarter GDP at a time when the global economy is firing on all cylinders.

The main South Korean index, iShares MSCI South Korea Capped (EWY B), has risen nearly 1% in the past five days, extending 12-month gains to as much as 36%.

The U.S. dollar continued its downward slide this week, as NAFTA faces the risk of disappearing. Canada’s central bank hiked interest rates to 1.25% but indicated further increases will hinge on whether NAFTA will survive in the current format. Platinum surged of late along with other precious metals thanks to a weak dollar, while Netflix’s impressive subscriber growth performance boosted consumer discretionary ETFs. Finally, South Korea made it to the top as it continues to battle its rogue neighbor North Korea.