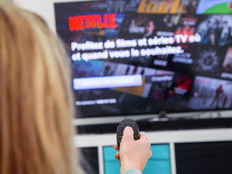 Netflix and its outstanding fourth-quarter results took the top spot in this week’s list, while an unexpected announcement from United Continental locked in second place for the airline industry. FAANG ETFs were also of interest due to the upcoming earnings calls. Solar energy, which received a blow from the U.S. president’s plan to impose tariffs on panels, took fourth place and, lastly, the weak U.S. dollar attracted attention as it accelerated its descent.

Check out our previous trends edition at Trending: NAFTA Faces Risk of Crumbling If Deal Is Not Reached.

Impressive Performance and a Bright Future for Netflix

Netflix has surprised both investors and analysts by posting astonishing numbers in the most recent earnings report, sending viewership figures up by 751%. Having high exposure to the California-based enterprise, PowerShares NASDAQ Internet ETF (PNQI C+) benefited by rising more than 5% during last week, bringing year-to-date performance to 11%.

Attracting a record 8.33 million new subscribers in the fourth quarter and presenting a bullish forward guidance helped NFLX crack the $100 billion market capitalization mark. An advance of 45% since the start of the year and another 55% in 2017 were enough for the “fear of missing out” sentiment to set in, causing investors to flock to the stock and send it sky high.

Perhaps even more stunning is that the growth acceleration happened in spite of price hikes, which points to the company being in full control of price levels, and should it decide to add incremental revenue, it can do so without risking alienating customers.

Another bullish narrative is the strong performance in international markets, where it added 6.35 million new subscribers. In addition, no sign of decelerating is in sight as the global market is sparsely penetrated. Meanwhile, in the already saturated U.S. market, Netflix posted better numbers than a year ago and expects to beat history again in the next quarter due to further cord cutting.

Airline shares crashed after United Continental disclosed plans to increase capacity at a faster-than-expected rate of 4% to 6% a year for the period between 2018 and 2020. With the fear of a dent in profitability, all the major airlines stocks fell. For instance, United’s stock fell off a cliff by 11%, while its peers Southwest (LUV), Delta Airlines and American Airlines all tumbled between 4% to 6% in a single day.

The interest in the story soared, attracting 396% increase in traffic as investors tried to grasp the opportunity and rebalance their portfolios. The U.S. Global Jets ETF (JETS C+), which comprises the major four airlines as top holdings, had seen a rise of 6.5% in the wake of United’s release but suffered a serious setback, ending flat the first month of the year.

United aims to restore market share and regain the top spot once held through its aggressive growth plan, but it also managed to spook investors by igniting fears over profitability. A price war with low-cost carriers would be hard to win because the “matching prices” policy would put a dent into any large airline’s financials as they have higher-cost structures.

United’s plan to grow both its domestic network and its international routes departing from its hubs may work, but it will certainly take time to do so. The International Air Transport Association expects a doubling of passengers travelling by 2035 to 7.2 billion, and this could very well put United in the top seat to reap the benefits of the ever more crowded skies.

FAANGs Ramping Up for Earnings Season

With four companies announcing quarterly results in a 24-hour window, investors are on the lookout for opportunities. Netflix has surely contributed to the growing appetite, propelling viewership of FAANG ETFs 164% higher, with PowerShares QQQ (QQQ B+) benefiting the most. Having a balanced exposure to all U.S. tech giants, it posted a solid 8% rise since the start of the year up until Wednesday close, extending 12-month gains to as much as 35%.

Netflix delivered a thumping start of the fourth-quarter earnings season, and the rest are waiting to follow suit as market participants are preparing for upbeat results from all major tech companies.

Investors are trying to grasp the opportunity and take advantage of the anticipated optimistic climate. Amazon (AMZN) is set to continue expanding in the U.S. retail market, stinging traditional brick-and-mortar businesses. Its Prime and AWS cloud business are two of the most powerful tools Amazon counts on for future expansion.

Facebook is set to shake its latest fears over reduced time spent on the platform amid a switch between the “relevant content” newsfeed policy and the announced “meaningful social interactions” mode. These are likely to be offset by an increased pricing power caused by the limited ad inventory. Alphabet (GOOG) may once again display sound financials, while Apple (AAPL) could offer a negative shock due to an apparent slack in interest for its $999 flagship iPhone X. Despite anticipating beating fourth-quarter expectations, Apple’s future guidance may disappoint.

Aiming to slow imports from China and other Asian manufacturers, U.S. President Donald Trump said the U.S. would impose a 30% tariff on imported solar panels. But this move could very well bounce back to hit domestic jobs as up to 23,000 positions in the manufacturing of various parts for imported panels will be wiped out, The Solar Energy Industries Association estimated.

However, the tariff will reduce to 15% over four years, clearing the path for increased domestic production and in-house innovation.

U.S. Officials Batter Down the Greenback

Both Treasury Secretary Steven Mnuchin and Commerce Secretary Wilbur Ross had comments seemingly designed to bash the U.S. dollar last week, causing a significant surge in traffic for the Inverse/Short U.S. Dollar ETFs. Investors are looking to capitalize on the greenback’s downturn by buying into inverse ETFs like the PowerShares DB US Dollar Bearish Fund (UDN B-), which increases when a trade-weighted basket of currencies strengthens relative to the U.S. dollar.

Cheering the dollar’s descent may be tempting when only taking the exporters into account; however, the current state of the economy as well as rising inflationary pressures are increasingly a risk to the overall economic climate. The already 2% inflation expectations embedded in 10-year inflation-protected Treasury bonds coupled with full employment and the forthcoming tax cuts could spell trouble for an economy that is already at or close to maximum output. The risk lies in forcing the Federal Reserve to hasten its campaign to lift interest rates, undermining the much awaited cut in taxes.

Netflix took center stage this week with remarkable performance and forward guidance, setting a high bar for the upcoming marathon in earnings calls from the rest of the tech behemoths. United Continental managed to shatter investor hopes for steady profitability and financial discipline, preparing instead for price wars and a battleground-like setting for market share. The solar industry got hit by fresh tariffs aimed at foreign panel producers as it hurts domestic growth in the short term, while the U.S. administration hinted at the advantages of a weaker dollar, which prompted another leg down for the buck.