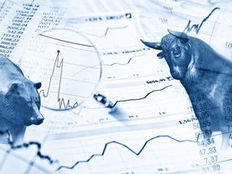 The intensity of recent volatility captured the top spot on the list as investors ponder a return to the markets.

Technology stocks have recouped most of the losses from the start of the month, while the signed bill that grants a hike in military spending continued to drive interest towards the aerospace & defense sector. The recent sharp rise in government bond yields also caught attention as well as high-yield bonds, which trended thanks to a growing desire to diversify away from more volatile assets.

Volatility Strikes Back After Long Period of Complacency

The much anticipated return of volatility in the markets startled investors with its magnitude and attracted heightened interest amongst our readers in the volatility-tied page of up to 168%.

Volatility spikes in the financial markets are far from unusual. That said, the two years through to the end of 2017 have set the bar quite low, and investors proved complacent when it came to calculating the risk of investing in different sectors. In that dormant environment, a sentiment of endless positive returns had set in as more and more investors gave up on hedging.

All this came to an abrupt end at the start of February as VIX spiked the most in a single day, causing waves of selling in the stock market and risk parity strategy adjustments. The violent swings have caused an implosion of volatility-tied products that posted strong gains in 2016 and 2017.

On the other hand, it has also offered opportunity for those embracing the turbulences that marked the better part of the last month, as ETFs like iPath S&P 500 VIX Short-Term Futures ETN (VXX A-) performed spectacularly. The ETF offering investors a way to gain from the exposure to negative correlation to U.S. and international stocks posted a 57% rise from the start of the year, with a peak of 98% at the depth of the turmoil.

Technology Giants Propelled Back to Highs

Investors have seemingly bought into the recent dip when it came to the technology sector. The upswing drove a viewership increase of 133% for the PowerShares QQQ ETF (QQQ B+) as market participants were noticeably interested in the strength of the ETF and the sector as a whole, especially when compared to the larger S&P 500 or the Dow Jones Industrial Average.

A strong earnings season contributed massively to the large inflows to the PowerShares ETF, with investors pouring $3.3 billion into the fund over the last five days. The ETF had plunged by 10.5% in less than two weeks only to recover over 90% of that loss over the next 11 trading days. That shows trust in its component companies, such as tech behemoths like Apple (AAPL), Microsoft (MSFT), Amazon (AMZN) or Facebook.

Another encouraging aspect was the bright future guidance published by the likes of Amazon or Netflix (NFLX). Amazon hinted at its advertisement ambitions as reports came out noting that the company has already surpassed both Twitter (TWTR) and Snap (SNAP) in ad sales. On top of that, Amazon is also launching a delivery service for businesses, thus, taking on FedEx and UPS. Netflix, meanwhile, managed to exceed expectations and attract a record 8.3 million subscribers despite a price hike, and pointed to strong future growth in the U.S.

Traffic to Aerospace & Defense ETFs rose considerably once again, by 121%, as the U.S. president signed the bipartisan military spending agreement reached at the start of the month.

Under the approved bill, the limit on military spending would be increased by $80 billion in the current fiscal year and $85 billion in the next year, taking the estimated U.S. military spending to a whopping $886 billion through September 30, 2019. President Donald Trump argued that that the defense sector needs strengthening urgently – with the extra money being deployed to space and cyber, nuclear deterrent forces, missile defense, advanced autonomous systems, artificial intelligence and professional military education.

The iShares U.S. Aerospace & Defense ETF (ITA B+) has performed well after the bill was signed on February 9, rising by 9.4% to yesterday’s close. (ITA B+) also posted an impressive 33.6% advance over the last 12 months. iShares U.S. Aerospace & Defense ETF offers exposure to companies set to benefit from the increase in expenditures, like Boeing (BA), Lockheed Martin (LMT) or Raytheon (RTN).

Following the market rout at the start of the month, investors looked for clues whether to jump back in at the lows, sit on the sidelines or diversify into calmer asset classes. As such, Government Bonds ETFs has seen its viewership swell by 109% as bonds have lately been regarded as a barometer for the health of the stock market instead of earnings.

The 10-year Treasury yield, which sets the cost of money for the world, has risen extremely close to the psychological threshold of 3%, sending jitters into markets that, once surpassed, an acceleration would pose a serious threat to over-leveraged companies and lead to a capital exodus in the emerging markets. Technically, higher rates should be the result of high growth, but the stock market suddenly dreaded the rapid inflation advance and feared this would prompt the Federal Reserve to come on too strong, hurting the recovery.

Investing in the short end of the maturity curve through the iShares 1-3 Year Treasury Bond ETF (SHY A-) could prove a better choice when choosing a safe haven to park assets in volatile markets, at least more attractive than its longer-term alternatives. (SHY A-) has posted a modest year-to-date drop of 0.5%.

As anxiety spreads in the markets along with rising Treasury yields, our readers turned their attention to the High Yield Bonds ETFs and drove traffic up by 58% over the last week.

Leveraged loans often offer juicy yields but concerns over such products have arisen lately. Indebted companies have the most at stake as elevated interest rates pose a real threat to their financials. Analysts show that if ten-year Treasury yields rise above 3%, approximately 12% of U.S. companies would have trouble covering interest expenses with their earnings.

PowerShares Senior Loan ETF (BKLN B+) delves into the high-yield bond territory by investing in leveraged loans to offer attractive yields. The ETF has posted a modest 0.2% gain over the last two months and has been sitting in a range for the better part of 2016 and 2017.

Volatility remained at the center of our readers’ interest as it apparently drives market participants’ sentiment from one sector to another as risk ebbs and flows. Technology enterprises managed to escalate to previous highs on the back of strong financials and positive future guidance. Meanwhile, aerospace & defense continued to allure investors, thanks to the bolstered military expenditures voted in by the U.S. Senate. Treasuries and high-yield bonds snatched attention as investors reflected over the risks of accelerating interest rates.