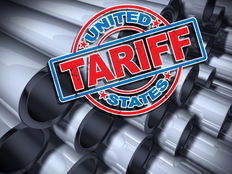 The U.S. president made good on his word and signed two orders imposing tariffs on steel and aluminum imports, while excluding Canada and Mexico as negotiations on the North American Free Trade Agreement (NAFTA) are a work in progress.

The decision had ripple effects across the semiconductor sector and prompted investors to act with caution, while ETFs linked to Canada completed the podium. Corporate bonds were sought after as a way to divest from risky assets and emerging markets equities came in last for the week.

Initially judged as a step towards a full-blown trade war with a wide array of commercial partners, the sweetened orders inked by President Trump gave investors room to breathe. Canada and Mexico were spared from the burdening tariffs, albeit temporarily, as the neighboring countries renegotiate NAFTA. In addition, lawmakers would also develop a procedure for countries with a close security relationship with the U.S. to seek exemptions. The whole story prompted a surge in viewership on Steel ETFs by as much as 201%.

The Trump administration invoked a national security loophole to impose tariffs, but global partners seem to prepare for potential retaliation measures. The legal stunt was designed to give American negotiators the upper hand in various trade negotiations and reduce large trade deficits. The U.S. has a $375 billion trading shortfall with China, $69 billion with Japan and $65 billion with the largest European economy, Germany.

Since the huge amount of steel and aluminum needed by the American industry cannot be produced locally, hopes have emerged that more countries could benefit from exemptions. The Aluminum Association, which represents the domestic industry, suggested that the tariff plan should be aimed at China and not Canada or the European Union.

On the other hand, the tariff plan was supposedly enacted to protect the domestic industry for national security purposes. However, they would have no impact on the Department of Defense’s steel and aluminum requirements, as the U.S. military uses only about 3% of U.S. domestic production of steel. Less of good news is that tariffs would be harmful for downstream industries, like car and equipment manufacturers. The U.S. steel industry supplied about 70% of the domestic market last year. Given the fact that most goods are manufactured locally, metal producers could take advantage and charge more to companies like Boeing (BA), General Motors (GM) and Whirlpool (WHR). This would put exporters at a competitive disadvantage in global markets.

Investors are cautious and have quietly continued last week’s sell-offs, sending VanEck Vectors Steel ETF (SLX B+) lower by another 2.1% over the past 6 days.

Investors initially thought that American chip makers would be hurt when President Trump first announced that he will impose tariffs on imports of steel and aluminum, and rushed to the Semiconductors ETF List for clues. As a result of Trump’s tariffs and the failed deal between Qualcomm (QCOM)and Broadcom (AVGO), the semiconductor sector recorded a 131% spike in traffic

The general consensus points to some degree of reprisal measures as Chinese officials have already argued for “justified and necessary response” to the U.S. tariff plan. This could escalate given past threats of fines against China by the U.S. president, who is enraged by the fact that the Asian counterpart has forced American firms to share their intellectual property as a cost of doing business on Chinese soil. If Trump decides to crack down on intellectual property theft, U.S.-based semiconductor companies that have Chinese customers could get caught in the crossfire.

However, as the dust settled, markets grew calmer and realized that it is actually in its best interest for China to offer a soft answer and the retaliatory steps should be low key. China is interested in gaining a reputation inside the World Trade Organization and the prospect of becoming a guarantor of free trade seems appealing. Or at least more so than starting a full-scale trade war over an inconsequential $4 billion export bill – the total amount of steel and aluminum it sold in the U.S. last year.

The other reason that sparked attention in the sector was President Trump’s executive order to block Broadcom’s $117 billion bid for Qualcomm, the largest technology deal ever. The U.S. administration cited national security reasons for its decision and continued by arguing it had “credible evidence” that Qualcomm’s innovative character would be abandoned for a more profit-driven approach.

As such, the iShares PHLX Semiconductor ETF (SOXX A-) rebounded and is now 7.3% higher compared to the sell-off right after Trump’s announcement on March 1. It is also up a solid 13.3% for 2018.

Since the start of its mandate, the U.S. administration has made a habit of bashing its northern neighbor. After the 20% tariff on Canadian softwood lumber and various references to supposedly unfair practices, the steel and aluminum tariff orders put Canada in a very tight spot when negotiating NAFTA. And the fact that it has been temporarily exempted from the punitive tariffs places a heavy burden on negotiators and, ultimately, exporting companies. Canadian ETFs have witnessed a rise in viewership of 129%.

Canada cannot afford to continue a confrontational policy with its southern partner. It exports over 90% of its steel to the U.S., the most of any country, and accounts for 41% of America’s aluminum imports. On top of this, its GDP has lately expanded only mildly, by a subdued 1.7% in the fourth quarter and its stock market is down by 4% for the year. These aspects do not bode well for Canada’s ongoing efforts to get the best possible trade agreement with its North American neighbors. On the other hand, there is mutual interest that talks on NAFTA move forward and businesses enjoy a lucrative environment. That said, Canada may be forced to accept some concessions if it desires to keep the U.S. hooked on its goods at the same elevated levels as currently.

Canadian ETFs have been hit since the start of February, with the iShares MSCI Canada (EWC B+) losing 6.3% this year.

The recent rout in bond markets resemble the October-November 2016 drop as the violent move looks overdone. Investors are seeing opportunity of another leg up, with Corporate Bonds ETFs seeing their traffic rise by 119% in the past week.

The iShares iBoxx $ Investment Grade Corporate Bond (LQD A) seems to have formed a base at the same levels seen before Trump was elected. This could prove to be a buy-on-the-dip opportunity as interest rates have been advancing and the brighter outlook may lead the Federal Reserve to increase interest rates at a higher pace. The global demand for dollar-denominated fixed income assets is still larger than supply. Besides, the current fiscal policy is encouraging higher expenditures, pushing inflation higher. The whole picture is luring large investors back into the game as the February meltdown looks distant.

The second month of 2018 proved challenging for equities around the world with the ones in emerging markets suffering the most. Emerging Markets Equities ETFs have seen their viewership rise 83% this week.

Following an impressive 28% surge in 2017 and another 10% in the first 20 days of 2018 for the Vanguard FTSE Emerging Markets ETF (VWO A+), investors resisted selling during the subsequent rout and actually took advantage of the lower prices. The ETF made up most of the losses and is now up 5% for the year.

A risk-on sentiment is back on the table and the numbers suggest the world economy may continue on this path of a “Goldilocks” environment with emerging markets set to enjoy its perks.

Donald Trump signed the tariff plan that imposes a 25% import tax on steel and 10% on aluminum, but left wiggle room for allies as the main target seems to be China. Semiconductors were first hit by the announcement but rapidly recouped the losses as the fears over harsh countermeasures targeting U.S. companies operating in China faded away. Canada has its back against the wall as it needs to find common ground with the U.S. on trade and economic relationships. Lastly, corporate bonds and emerging markets equities trended due to a revitalized sentiment in the markets after recent trepidations.