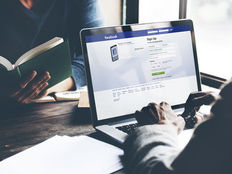 Trending: Facebook Plummets as Watchdog Launches Investigation Into Use of Personal Data

The high-stakes scandal relating to an investigation into Facebook’s improper use of personal data grabbed the headlines and prompted investors to sell off the stock.

Facebook and tech equities both trended this week, coming in first and third on the list. Optimism about a potential NAFTA agreement propelled Canada to second place, while lithium demand is expected to spur a wave of deals in the sector. High yield bonds close the list.

Facebook in Rough Waters After Personal Data Use Scandal

Tech darling Facebook is facing a period of uncertainty after revelations that the company might have improperly used customers’ data. As a result, Facebook saw its traffic surge 688% in the past five days.

The scandal broke after it was revealed that consulting firm Cambridge Analytica used data from 50 million users to help the Trump campaign win the presidential election. Facebook denied any wrongdoing, saying that it allowed access to user data because Aleksandr Kogan, the researcher who sold the data to Cambridge, promised to use users’ profiles for research purposes, not for commercial goals. Facebook also said that Kogan breached the firm’s policies by handing the information to Cambridge.

Whatever the truth, Facebook is now facing an investigation by the U.S. Federal Trade Commission on how the data was employed and whether it violated the terms of a 2011 decree over its handling of personal data. If the FTC finds that the company breached the decree, the fine could amount to several million dollars. In itself, the penalty will prove insignificant for Facebook’s bottom line, but users might stop using the service, which would hurt the company’s business.

Indeed, Facebook has shed as much as 8% of its value in the past five days, bringing year-to-date performance into negative territory at 4%. As a result of the fallout, social media-heavy Global X Social Media (SOCL C) has dropped more than 3% in the past week.

Calls on users to delete their profiles from Facebook have increased following the scandal, although it remains to be seen whether this would have an influence on the long-term performance of the stock. Brian Acton, the co-founder of WhatsApp, the company that was sold to Facebook in 2014, publicly called on users to delete the social media service.

Canada has seen its viewership rise 181% this week as the country’s policymakers see positive developments in renegotiations of the North American Free Trade Agreement (NAFTA).

In what is being considered a breakthrough, U.S. negotiators invited their Canadian counterparts in Washington to discuss a new trade deal. The auto industry is the most important topic for the U.S. and both Canada and Mexico are aware of it. U.S. trade representatives previously proposed that vehicles must have 85% North American content (from 62.5% previously) and 50% U.S. content to be eligible for duty-free movement across the border. Canadians said that the proposal was unacceptable and offered a counter-offer, with Flavio Volpe, president of Canada’s Automotive Parts Manufacturers Association, saying that Americans were willing to listen.

Canada said that perhaps NAFTA should include in the list of traceable car components software and other automated parts, not just steel and aluminum. That move would definitely give the U.S. the upper hand because most of these parts are developed in the U.S.

The negotiation talks are complicated by upcoming political events in all three countries – Mexico’s presidential election in July, U.S. mid-term elections in November and provincial elections in Canada’s Ontario and Quebec. The U.S. is pushing for a quick resolution to the NAFTA negotiations, but Canada and Mexico are both contending that a swift conclusion is borderline impossible.

iShares MSCI Canada (EWC B+) has increased around 0.5% in the past five days, extending year-to-date gains to 4.7%.

Technology equities have taken the third spot in the list with a 172% rise in viewership, in no small part due to the improper data use scandal plaguing Facebook.

PowerShares QQQ (QQQ B+), the main tech ETF with $64 billion in assets under management, has declined 2.4% in the past five days, underperforming the S&P 500 by more than one percentage point. Year-to-date, (QQQ B+) remains up more than 7% and is one of the best performers thanks to the stellar performance of Netflix (NFLX) and Amazon (AMZN).

Facebook is the fourth largest holding of (QQQ B+), making up 5.13% of total assets, after Apple (AAPL), Amazon and Microsoft (MSFT). The four technology titans collectively make up as much as one quarter of (QQQ B+), so if one company underperforms, the impact on the entire index is felt.

Lithium has taken the fourth spot in the list with a rise in viewership of 155%, as the battle for the chemical component is intensifying given its importance for building batteries powering electric cars.

Chile’s government, for instance, asked the nation’s antitrust regulators to block a stake sale of lithium producer SQM to a Chinese company, contending the move would give China an unfair advantage in the battle for lithium dominance. SQM is the world’s largest lithium producer and Tianqi, the Chinese firm, agreed to pay a 20% premium over the unaffected stock price.

Tianqi and SQM are close competitors and their collaboration could lead to an increase in the price of lithium, potentially threatening the advent of electric cars. Even so, Tesla (TSLA) is already having troubles delivering on its promise to build 5,000 cars per week due to bottlenecks at its battery plant. As a result, Global X Lithium (LIT C+) has dropped more than 2% this week, extending year-to-date losses to as much as 12.2%.

For a deeper analysis on individual ETF investments such as (LIT C+) or (SOCL C), use our ETF Analyzer Tool. You can select ETFs by Category or Type, as well as add individual ticker symbols to compare performance, expenses and dividend yield among other metrics.

High yield bonds have started a small recovery after dropping consistently in the most recent market rout. iShares iBoxx $ High Yield Corporate Bond (HYG B+) has risen slightly in the past five days, although it remains down nearly 2% since the beginning of the year.

The U.S. Federal Reserve raised interest rates on Wednesday, in a widely expected move. The Fed, under new chairman Jerome Powell, hiked the benchmark interest rate by a quarter percentage point to a range between 1.5% and 1.75%. Rising rates are expected to have a negative impact on high yield bonds as rising yields lead to falling prices. Increasing rates could put pressure on some high yield exponents that do not have a strong financial standing.

This week, Facebook continued its decline as the U.S. government investigates possible improper use of users’ personal data. Meanwhile, across the U.S. border, Canada sees progress in reaching a new NAFTA deal with the U.S. and Mexico. Facebook’s scandal has weighed negatively on technology stocks, and Chile moved to block a sale stake in the world’s largest lithium producer SQM to a Chinese firm. Finally, the U.S. Federal Reserve raised interest rates again, potentially putting pressure on high yield bonds.

By analyzing how you, our valued readers, search our property each week, we hope to uncover important trends that will help you understand how the market is behaving so that you can fine-tune your investment strategy. At the end of the week, we’ll share these trends, giving you better insight into the relevant market events that will allow you to make more valuable decisions for your portfolio.