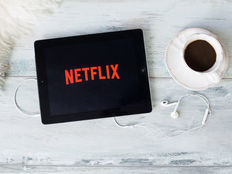 The unexpected shift to a more peaceful approach from the North Korean authorities, coupled with the upcoming summit between the two neighbors of the Korean Peninsula, put South Korea into the spotlight these past few days. Regional banks are set to capitalize on rising interest rates and deregulation, while commodities, particularly aluminum prices, whipsawed on strong demand, trade conflicts and U.S. sanctions.

It has been yet another startling quarter for the streaming giant, and investors took note of the remarkable numbers, upping their interest for ETFs with exposure to Netflix (NFLX), with traffic to the company surging by 220% during the last week. Original content expenditure is paying off and aggressive expansion into international markets proved a well-designed tactic to lure ever more subscribers.

The company continued its series of better-than-expected subscriber growth, this time managing to beat its own optimistic forecast of 6.3 million subscriber additions by 17% to 7.41 million, totaling 125 million subscribers globally. The rise came largely from overseas, with 5.46 million net international subscribers added, ahead of analyst expectations of 5.02 million. Local business has not disappointed either – 1.98 million new contracts signed, with the U.S. remaining Netflix’s single largest market with 56.7 million subscribers.

The 2018 first quarter numbers are all the more impressive considering the $1 price hike for most subscribers, indicating a pricing power that keeps clients hooked on the service despite incrementally rising fees.

On the revenue side, things are looking up as well, with the corporation posting a 43% rise over the prior year period. Operating margins were 12.1%, a high-water mark in recent quarters, and net income reached $290 million, up 63% from a year ago.

Future prospects are encouraging as the media giant ramps up original content production and aims to offer some 700 original series and 80 original movies in 2018. Its goal is to tap into a worldwide pool of potential users by delivering a diversified and internationally designed content library through its distribution network.

Netflix (NFLX) surged 9.4% the day following the first-quarter results, lifting the tech-heavy PowerShares Internet (PNQI C+) by 3.6%. However, due to exposure to other technology companies that have suffered lately, like Facebook or eBay (EBAY), the ETF has not recovered from the late-March decline as investors continue to shy away from tech giants.

The much anticipated summit between the leaders of the two Koreas sparked interest with Kim Jongun’s shift away from the belligerent attitude to a more peaceful stance. The South Korea ETF List saw its traffic advancing by 119% as investors cheered the changing landscape in the South Korean peninsula.

North Korea recently declared it was open to denuclearization, in a signal that could be a new start of economic prosperity in the peninsula. Kim Jong-un pledged to seek a favorable international environment for economic development so that his country’s economy would be set on an upward spiral track. The leader hopes to engage other countries in the process of rebuilding the economy as well as assuring that the crippling sanctions on trade, financial and energy operations would be lifted soon.

However, the land is filled with gold, copper, zinc and coal as well as rare minerals like magnesite and molybdenite. South Korean estimations point to a value of $6 trillion to $10 trillion for North Korean minerals, proving just how important it is for the sanctions to be lifted. Their Southern neighbor could take the lion’s share as it already has an industrialized economy that could use a wide array of minerals in its technology sector.

The iShares MSCI South Korea (EWY B) was supported by investor enthusiasm in the first days after the policy shift, rising nearly 2%. However, optimism did not last and the ETF retreated due to fears the process would take longer than expected. Year-to-date performance is still in the red at negative 1%.

To find out more about ETFs exposed to particular countries, check our ETF Country Exposure tool. Select a particular country from a world map and get a list of all ETFs tracking your pick.

Regional Banks to Benefit From Rising Rates and Deregulation

Once the dust settled on big banks’ earnings, investors steered toward regional banks as they are somewhat better positioned to reap the benefits of both rising wages and growing retail sales as well as local infrastructure spending. As a result, Regional Banks saw their viewership rise by 80%.

Tailwinds, such as continued margin expansion and a reaction to the Federal Reserve raising interest rates, should drive profitability higher in the banking business over the next few years. In addition, regional players are set to bank on deregulation as the new administration is pushing for a looser supervisory environment. The Senate passed a bill in March that lifts the threshold for a systemically important financial institution, from $50 billion to $250 billion in assets. This change would help many regional banks escape the regulatory entanglements and expenses.

SunTrust Bank (STI) is at the forefront of regional lenders who would enjoy the perks of having large operations but beneath the aforementioned boundary. Having massive presence in the Southeast, with 1,400 bank branches and 2,160 ATMs across 12 states, the Atlanta-based lender reported earnings of $1.29 per share, handily beating estimates of $1.1. It also represents a 42% year-over-year growth, thanks to tax reform, efficiency improvements and buybacks. SunTrust is the 12th largest bank in the U.S. with $205 billion in assets.

SPDR S&P Regional Banking ETF (KRE A-), the largest ETF to offer exposure to regional banks, rose by 4% over the last five days. The ETF avoids concentration as it balances its portfolio with 120 stocks.

Use our Head-to-Head Comparison tool to compare two ETFs such as (KRE A-) and (EWY B) on a variety of criteria such as performance, AUM, trading volume and expenses.

Commodities enjoy renewed attention from investors as prices continue to be supported by a broad-based global recovery. Concerns about mounting geopolitical tensions have lifted oil and some precious metals prices, causing a surge in traffic for Commodity ETFs by 66% over the last week.

The recent bursts in prices have very different roots, with some rallying on the back of political moves on trade tariffs and others due to economic fundamentals. Copper prices have recently recouped losses amid hopes that global growth will remain intact. Oil rallied on the back of huge demand for gasoline and rising tensions between Iran and Saudi Arabia, coupled with possible new sanctions on Iran.

PowerShares DB Commodity Index Tracking Fund (DBC A) has witnessed consistent inflows over the last 30 days and rewarded investors with a 2.24% performance. The ETF is primarily exposed to the energy sector but could very well be supported by an anticipated rise in metals and agricultural products.

Aluminum prices surged to levels not seen in seven years as the clampdown on Russian mining behemoth RUSAL, the largest aluminum supplier outside China, reverberated through metal markets. The tensions caused a 41% spike in traffic for Aluminum ETFs as panic took over and wild moves in prices ticked on traders’ screens.

The U.S. sanctions against United Company RUSAL were aimed at Russian oligarch Oleg Deripaska, the largest shareholder in the mining giant and a blacklisted businessman by the U.S. Treasury. However, after wiping out half of the company’s value, the U.S. hinted at relieving pressure if the oligarch relinquishes control over the firm. In addition to that, the U.S. Treasury gave American customers of Russia’s biggest aluminum producer more time to comply with sanctions, which also grants RUSAL an opportunity to sell off the large quantities of aluminum it had been stockpiling in the wake of sanctions.

Aluminum prices reversed gains and settled around the levels seen at the start of the year, the same being true for the iPath Series B Bloomberg Aluminum Subindex Total Return ETN (JJUB ), the only ETF tracking aluminum futures.

Netflix stole the show once again with spectacular new subscription numbers and aggressive expansion into international markets. South Korea hopes for peaceful and prosperous times once a new phase of demilitarization commences in the Korean Peninsula. U.S. regional banks stand to post hefty profits on the back of higher interest rates, declining non-performing loans and an anticipated deregulation of the financial sector. Commodities keep investors hooked as prices ebb and flow with numerous political trade threats and sanctions. Lastly, aluminum prices skyrocketed only to retreat once the U.S. authorities softened their stance on RUSAL.