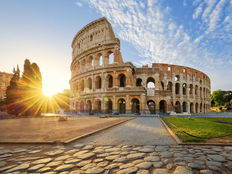 Oil continued to trend as prices were supported lately by a boost in U.S. production as well as discussions between OPEC members regarding a rise in supply aimed at balancing global demand. Gold and emerging market equities followed as both enjoyed renewed attention due to trade war concerns and a weakness from the greenback. Canada closed the list as President Donald Trump removed exemptions on steel and aluminum tariffs.

Italy has been the centerpiece of economic global news over the past week, witnessing a whopping 800% surge in traffic. Politicians in the European country clashed and came close to the brink only to find a last- minute solution in the face of exploding funding costs and severe capital outflows. This prompted a sell-off in the largest ETF that offers exposure to the nation’s economy, the iShares MSCI Italy Capped ETF (EWI B+). The ETF declined by 12% over the past month while posting a slightly negative performance for the year.

Use our Head-to-Head Comparison tool to compare two ETFs such as (EWI B+) and (DBO A) on a variety of criteria such as performance, AUM, trading volume and expenses.

The political situation in Italy deteriorated rapidly over the last two weeks, causing anxiety in the markets as the two parties that won the elections in March were unable to form a government. President Sergio Mattarella rejected the nomination of Paolo Savona for finance minister, the 81-year-old eurosceptic who has long been an advocate for an Italian exit from the eurozone. This move has sparked fears that snap elections could follow as soon as this fall, and this time the entire European project would be on the table if hard-right-wing populists were to prevail.

Markets reacted and punished Italian sovereign bonds with worst day in more than 25 years. On May 29, the 2-year yield spiked more than 150 basis points to 2.73%, while the 10-year bond yields jumped 50 basis points to their highest level in over four years at 3.38%. Also, the cost of insuring exposure to Italian risk in the five-year credit default swaps market rose to a four-year high of 225 basis points.

The fears were somewhat muted once President Mattarella accepted a compromise and named both leaders of the two populist parties who won most votes in March in a coalition government. Still, European leaders are worried that the highly indebted nation, with a government debt-to-GDP ratio of 131%, cannot withstand more financial shocks as the one recently provoked by its politicians. Some 48% of all government bonds, well over one trillion euros, are held by Italian banks, insurers and small savers.

Despite a sharp fall in prices over the last 10 days, Oil seems to get closer to finding support as the high demand season commences and the global economic backdrop is encouraging. The subject attracted attention, boosting viewership by 126% as investors looked for clues as to whether the recent slump has further steam or is approaching a solid bid.

After discussing boosting output, Saudi Arabia and Russia signaled a willingness to gradually increase exports in order to compensate for supply losses from Venezuela and Iran. U.S. sanctions on Iran could trim its oil exports by 400,000 to 500,000 barrels a day, but it is not yet clear if the largest buyers of Iranian oil – China and India – would derail from current contracts. Both nations are posting record levels of crude imports, consuming over a million barrels of Iranian oil daily between them, meaning they need as many suppliers as possible.

As the official gathering of OPEC nears, some participating countries met in advance, over the weekend, and displayed decisiveness to cooperate in balancing global supply. In addition, Bloomberg reported on Tuesday that the U.S. government had asked Saudi Arabia and some other OPEC producers to increase oil production by about 1 million barrels per day.

Invesco DB Oil Fund (DBO A) lost some of its vigors over the last two weeks, shedding nearly 8% in value since its late-May high but still holds a solid 15.57% year-to-date performance. However, increasing U.S. production is putting pressure on prices, while a possible OPEC decision regarding an output hike hinders any chances of a rally.

Investors Back to Gold as Trade War Fears Return

Investors sought out safe havens in the wake of another round of trade spats between the U.S. and its global partners. Gold was in demand as traffic intensified and surged by 121% over the last week. The benchmark and largest ETF in the sector, SPDR Gold Trust (GLD A-), traded sideways of late but managed to stop the bleeding that began in mid-April and sank prices into negative territory for the year.

For a deeper analysis on individual ETF investments such as (GLD A-) or (EEM A-), use our ETF Analyzer Tool. You can select ETFs by Category or Type as well as add individual ticker symbols to compare performance, expenses and dividend yield, among other metrics.

The rise in geopolitical tensions provided thrust for the precious metal but the effect was relatively short-lived as Italy jitters faded over the weekend. The dollar index, which measures the greenback against a basket of six major currencies, also provided support for gold prices as it fell from 2018 highs.

Emerging Markets Equities recouped some of the losses posted in May as the greenback and oil slid while yields on U.S. Treasury notes backtracked from seven-year highs. Viewership in the asset class grew by 88% in the last week as investors are pondering a return to the battered equities.

This spring has been quite challenging for equities based in emerging markets as figures from the Institute of International Finance published on Tuesday showed a heavy sell-off in emerging markets. Foreign investors dumped a combined $12.3 billion of emerging markets bonds and stocks in May, triggered by a combination of higher U.S. interest rates, a rally in the dollar and an upsurge in oil prices.

Canada Retaliates with Its Own Set of Tariffs

The U.S. administration’s decision to end exemptions on steel and aluminum imports from Canada spurred interest in the country while causing a jump in traffic of 73% over the past five days.

As NAFTA talks stalled and no major breakthrough took place, the U.S. announced that it would go ahead and impose the 25% on steel and 10% on aluminum tariffs on its allies, Canada, Mexico and the European Union. Canada got hit the most as it exports 90% of its steel and 84% of the aluminum it produces to the U.S., more than any other country. The Canadian steel and aluminum industry employs around 30,000 people across the country, while tariffs are estimated to cost the economy in excess of $3.2 billion a year.

In a swift response, Canadian authorities issued a list of more than 100 U.S. products, ranging from motorcycles to bourbon, that will be hit by tariffs starting July 1. The resolution is targeting roughly $12.8 billion worth of goods in a tit-for-tat measure.

The largest ETF with exposure to the Canadian economy, iShares MSCI Canada ETF (EWC B+), reacted strongly to the trade spat between the two historic allies, losing 2.2% in the two days after the U.S. ruling only to recover briskly. However, the ETF is still slightly in the red for the year.

Italy was the primary subject on investors’ radars as political confrontations provoked trepidations across financial markets while affecting the nation’s capacity of funding cheaply its sky-high indebted economy. Talks between the world’s largest oil producers about a hike in output were offset by strong global demand prospects, especially from China and India. Despite lingering concerns about trade wars between the United States and the rest of the world, investors feel hesitant when considering building positions in gold, while emerging markets equities found support from a declining dollar and falling yields for the U.S. Treasury notes. Lastly, Canada prepares for a new phase in trade relations with the U.S. as it responded to steel and aluminum tariffs with a wide array of import taxes on American goods.