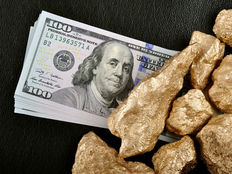 Gold inched down as investors steered to rival safe-haven assets regardless of increasing concerns over trade across the globe.

Bonds were preferred as alternative investments amid a whipsaw in equities, while mortgage REITs completed this week’s podium with their solid fundamentals across both commercial and residential sectors. Amazon trended due to its move into the online pharmacy business through the acquisition of PillPack, and Netflix closed the list with stronger guidance due to estimated continuous subscriber growth.

Gold in Search of Lost Glitz

Over the last quarter, the precious metal has struggled to counter a strong U.S. dollar as well as the more attractive, yield-paying U.S. Treasury notes. Gold has seen its traffic surge by 211% as prices moved down amid investor complacency toward trade frictions. Market participants pulled out $617 million from the largest gold ETF, the SPDR Gold Trust (GLD A-), over the last seven days, causing its price to dive close to levels last seen in the summer of 2017.

Benefiting from rate hikes and a healthy economic activity, the U.S. currency proves a nut too tough to crack for the shiny metal. The greenback has risen sharply, by more than 6.5%, against a basket of foreign currencies in the past few months as the Federal Reserve seems determined to increase interest rates for a fourth time this year in order to keep inflation in check and avoid a fall behind the curve. The U.S. Dollar Index, a closely monitored instrument that tracks the performance of the buck relative to a basket of six major currencies belonging to the most important trade partners of the U.S., rallied beyond 2018 highs.

Another issue for gold prices is the attractiveness of U.S. Treasuries as they pay interest, as opposed to the dollar-denominated bullion. The benchmark U.S. 10-year Treasury note yield remains elevated, at 2,83%, and allures money managers while diverting funds from classic safe havens like gold.

On a more positive note, the World Gold Council and State Street Global Advisors launched a physical gold ETF that represents the value of 1/100 of an ounce of gold, the SPDR Gold MiniShares Trust (GLDM ). Like its mature sibling, the new ETF trades on the New York Stock Exchange and hopes to draw investor attention with an expense ratio of just 0.18%.

Debt markets have been in the spotlight lately due to increased nervousness in equities. Bonds viewership numbers spiked by 133% as investors ran for safety and divested away from a tumultuous stock market.

While they may be a safer bet, debt markets are not shielded from central bank perils. The Federal Reserve triggered a negative reaction in bonds markets when it signaled a fourth-rate hike for the year, while the yield curve flattened to its lowest level since September 2007. This translates to growing fears about future economic weakness or a policy mistake by too aggressive central bank tightening. At present, the spread in yield between the short-end 2-year bond and the longer-end 10-year note lies below 30 basis points, an 11-year low. As the yield curve flattens further, another possibly dangerous phenomenon could get underway, an inverted yield curve, a widely regarded omen for recessions.

An alternative to U.S. debt exposure, Vanguard Total International Bond ETF (BNDX A-) is focused on European and Asian, mostly Japanese, debt. Taking into account that both the ECB as well as Bank of Japan have expanded their balance sheets and will continue to do so in the near future, investors have little to worry about when choosing this vehicle. One of the few bond ETFs with positive performance for the year, be it only 0.66%, the ETF has seen net inflows of $76 million over the last seven days and more than $2 billion since January 1.

Use our Head-to-Head Comparison tool to compare two ETFs such as (BNDX A-) and (GLD A-) on a variety of criteria such as performance, AUM, trading volume and expenses.

This relatively small but remarkably high-yielding segment of the REIT world is thriving even though rate hikes should have, in theory, acted as a backstop. Mortgage REITs, the segment specialized in lending money to owners of property or those buying mortgages or mortgage-backed securities, enjoyed renewed interest from investors, posting an upswing in traffic of 129% in the last week.

Mortgage REITs routinely borrow money at short-term interest rates and lend it at long-term rates and use leverage to amplify their returns, hence the risk from an accelerated increase in interest rates. Among companies that are good at hedging against the threat of rising rates, AG Mortgage Investment Trust (MITT) has proved resilient in the face of a tightening monetary policy, posting decent financial performance and a reliable dividend.

The iShares Mortgage Real Estate ETF (REM B+) had a rough first two months but has recovered nicely since then, as most of its components performed well while offering steady dividend payouts. The ETF advanced by 8.1% over the last four months as companies like Annaly Capital Management (NLY) reported higher interest income.

For a deeper analysis on individual ETF investments such as (REM B+) or (GLDM ), use our ETF Analyzer tool. You can select ETFs by Category or Type as well as add individual ticker symbols to compare performance, expenses and dividend yield, among other metrics.

Amazon managed to stir up trouble in the pharmacy business with its most recent maneuver to buy online pharmacy PillPack. The online mammoth almost doubled in traffic after announcing the agreed deal while causing a plunge in stock prices for other pharma corporations. As Amazon disclosed the agreement, it rose nearly 2.5%, a much-needed breather after a few rough days due to the escalating trade jitters between the U.S. administration and its allies.

PillPack is an online pharmacy licensed in 49 states that packages, organizes and delivers presorted doses of medications. The move from Amazon into this new business segment makes every possible sense as the 4 billion prescriptions ordered in the U.S. amass to over $300 billion spent on drugs by patients.

Investors seeking to benefit from Amazon’s aggressive business model may choose Vanguard Consumer Discretionary ETF (XLY A) as it is overly reliant on the performance of the Seattle-based corporation. The ETF managed to pull a 10.3% advance for the year while offering plenty of liquidity.

The streaming company seems to be capable of weathering out any geopolitical frictions and marches to its own beat when it comes to financial and stock performance. Netflix posted a twofold increase in traffic as markets keep beefing up confidence in the streaming video giant, citing the strength of its original content library.

The company’s stock has almost doubled in the six months marked by trade woes, sanctions and rising funding costs, while the S&P 500 was held hostage with a mediocre 2%. Giving its content scale and continuous international expansion, Wall Street analysts suggest another blockbuster second quarter, with an addition of 1.2 million domestic and 5 million international subscribers.

Invesco NASDAQ Internet ETF (PNQI C+) has Netflix as its top holding, which rewarded the ETF with a 17.74% advance for the year. Another enticing aspect of its business model is the introduction of a new service tailored for households seeking top quality streaming experiences. The Ultra subscription is currently being tested in Europe with a price tag of 16.99 euros and enables users to watch Netflix on four screens simultaneously enjoying the crystal-clear 4K Ultra HD resolution.

Gold is trying to hold its ground while pressured by gains in the U.S. dollar, a tightening monetary policy and a flight to U.S. Treasuries as yields in the 10-year benchmark note broke the psychological threshold of 3% a few weeks ago. Other bonds tempt investors as well, international debt being a healthy alternative for those worried about a flattening U.S. yield curve. Mortgage REITs seem to have found a way to shield themselves from rate hikes while benefiting from a conducive environment across the real estate sector. Lastly, Amazon and Netflix defy the troublesome geopolitical backdrop with acquisitions, aggressive expansion models and blazing guidance.