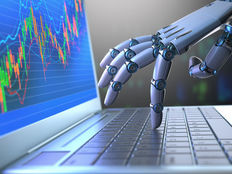 Robotics ETFs have cooled off a bit in 2018 following last year’s incredible run. Asset flows into these products have also slowed, but that hasn’t stopped ETF issuers from trying to capitalize on the long-term trend.

This week, BlackRock attempts to compete with the two biggest robotics ETFs in the land with a new offering of its own.

The fund seeks to mimic the returns of the NYSE FactSet Global Robotics and Artificial Intelligence Index, which includes companies that either derive 50% of their revenues, have at least a 20% market share or generate $1 billion or more in absolute annual revenues from one of the 22 RBICS sub-industries with exposure to a robotics and artificial intelligence theme. The list of sub-industries is determined by exposure to robotics and AI activities, such as semiconductor manufacturing, software, Internet and data services. Companies that qualify for the index are equal-weighted.

KraneShares has built an impressive roster of China-focused ETFs, including those focused on sub-industries, such as the Internet, healthcare, the environment and consumer technology. Up to this point, its fixed income lineup has been relatively sparse, but it grows this week with the introduction of the KraneShares CCBS China Corporate High Yield Bond USD Index ETF (KCCB B+).

KCCB aims to track the performance of outstanding high-yield debt securities denominated in U.S. dollars issued by Chinese companies. To qualify for the fund’s index, issues must have between two and five years remaining until maturity, a rating of BBB or lower by one of the big ratings agencies and no record of default, in addition to liquidity and tradeability screens. The KraneShares website notes that KCCB should appeal to investors because it offers the potential for higher yields, lower correlations to other global markets and comes without currency risk for U.S. dollar investors.

ALPS Launches a Fund for the Clean Energy Boom

Energy ETFs as a whole are big business for ETF issuers. They collectively manage more than $35 billion in assets, but assets in clean energy businesses are just a small fraction of that total. Alternative energy ETFs account for just $1.5 billion in assets, but the theme is starting to gain some traction. This week, ALPS adds to its roster of niche-targeted ETFs with the launch of the ALPS Clean Energy ETF (ACES A-).

ACES targets North American companies that develop renewables and other clean technologies, such as solar, wind and geothermal energies, biofuels, electric vehicles, smart grids and fuel cells. To qualify for inclusion in the fund’s index, the company must derive a majority of its value from one or more of these business segments. ALPS believes that ACES offers value since focusing on companies whose primary business model involves clean energy helps provide investors more pure play exposure to the industry.

This week’s batch of new ETF launches carries a bit of a futuristic theme. China has long been considered an emerging market with great potential and the fact that it’s beginning to open up its market to foreign investors should give the region a lot of opportunities. Robotics and artificial intelligence will continue becoming a major area of development in all areas of the global economy. BlackRock is a little late to the game in launching an ETF focused on this area, but its large scale should help it grow assets fairly quickly. Clean energy is another growing industry that’s still in its nascent stages, but it could become a significant investor opportunity as acceptance of the technology improves and the costs of implementation continue coming down.