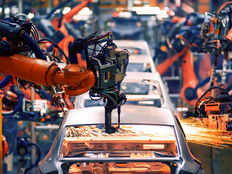 Another side of the talks focused on the EU agreeing to take steps to boost natural gas imports from the U.S., which is encouraging for the industry. Technology equities continued to trend as behemoths like Amazon, Facebook, Alphabet and Apple all reported second quarter earnings over the last week. Artificial Intelligence ETFs ranked fourth in the list as investments in the sector surged while medical devices were last on solid growth numbers.

The automotive industry has reasons to be cheerful after the latest meeting between the U.S. President and EU’s Jean-Claude Juncker. In a common statement, the two leaders announced that they are ready to negotiate a deal to expand trade relationships and hold off any additional tariffs in the meantime. This caused a spike in traffic by 53% as investors took a bullish but cautionary stance toward automakers around the world.

The deal eased tensions fueled by Trump’s threat to impose 25% tariffs on cars produced in Europe, a move that inflicted much pain on the likes of BMW, Daimler and Volkswagen. That kind of levy would increase the sale price of vehicles by $10,000 and would lead to a drop of nearly 50% in U.S. cars and car part imports from the EU, according to a European Commission assessment obtained by Bloomberg.

The surprising deal struck by the two leaders also contains a promise to resolve the issue of the newly imposed aluminum and steel tariffs on EU exports. The statement mentions steps into a new phase of “zero tariffs, zero non-tariff barriers, and zero subsidies on non-auto industrial goods” relationship. And while details are still vague, markets welcomed the agreement as a semi-truce between the two world powers, helping the global trade environment by reducing the level of anxiety around tariffs and other trade barriers.

As the U.S. touts the EU trade truce, investors are turning their attention to First Trust NASDAQ Global Auto ET (CARZ B), hoping that the current downturn will be reversed. The ETF has been wounded by the trade spat, with a negative 11.28% performance for the year as investors.

European Union to Import More Natural Gas From the U.S.

In a move to balance the promise to hold off any car tariffs, Donald Trump championed a deal that would increase America’s exports of natural gas to the European Union. As a result, viewership in natural gas advanced by 47%, with investors taking interest in the matter as President Trump is trying to help local producers compete in a market dominated by Russia.

European Commission President Jean-Claude Juncker promised to engage in building more terminals to import liquefied natural gas. Specifically, 14 LNG infrastructure projects are set to be accomplished by 2021 in a step that would increase the bloc’s capacity by 15 billion cubic meters. Among the most important projects, the Elba River LNG project in Northern Germany is designed to import five billion cubic meters per year. That amounts to 10% of Germany’s current annual imports from Russia. At present, Europe has 28 large-scale LNG import terminals with a processing capacity of 227 billion cubic meters per year.

News of the possible surge in exports to the EU sparked interest in LNG terminal operators, like Cheniere Energy (LNG), which saw its share price pop by 4% in the two trading sessions following the meeting. Investing in natural gas products, like United States Natural Gas Fund (UNG B-), can be an appealing option as higher exporting capacity in the U.S. and processing in European states bode well for the industry.

Markets have been caught off-guard by second quarter misses from industry giants like Netflix (NFLX) and Facebook. This prompted a wave of interest into technology equities that upped traffic by 31% from already elevated levels. Technology Select Sector SPDR Fund (XLK A) reacted to each meaningful earnings call and sold off over the last three trading days as extreme levels of confidence in the major players start to fade with every disappointing result.

Following Netflix’s big upset on subscriber growth, it was Facebook’s turn to hit markets with lower revenue than estimated and a projected slowdown in growth rate in the second half of the year. Amazon’s (AMZN) report was more of a mixed bag, with a miss on revenue, $52.9 billion vs. $53.4 billion, offset by a tremendous beat on adjusted earnings per share, $5.07 vs. $2.50. Second-quarter revenue was up 39% from the year-ago quarter while Amazon’s cloud computing unit, Amazon Web Services, reported a 49% surge in sales to $6.12 billion.

On a different note, Alphabet reported revenues of $26.2 billion in the second quarter, up 26%, outpacing analyst estimates. Apple was the last on the dock, with the iPhone maker saying it sold fewer phones but it managed to grow its revenue by 20% year-over-year, helped by an iPhone average selling price of $724, up from $606 a year ago.

Use our Head-to-Head comparison tool to compare two ETFs such as (CARZ B) and (XLK A) on a variety of criteria such as performance, AUM, trading volume and expenses.

Artificial Intelligence Is on a Tear

Technology companies are competing in a market that was not so long ago seen as a side business. This has changed as artificial intelligence took more and more resources from other areas in a race to build robots and assistants that improve a company’s productivity. Investing in companies with a strong focus on artificial intelligence is no longer an option for investors who want to shape a long-term portfolio. Interest in the sector advanced by 25% over the last week.

Last year, investors pumped over $15.2 billion in funding into artificial intelligence startups across multiple industries. This amounts to a 141% spike in funding from 2016 while a whopping 1,100 new AI companies have raised their first rounds of funding in these last two years. Alphabet is the top investor and buyer when it comes to AI, spending $3.9 billion in disclosed deals since 2006. Amazon ranks second, with $871 million, pouring funds to improve projects like its intelligent voice assistant, Alexa, a software that uses neural networks for natural language processing to analyze the human voice and return the appropriate response.

First Trust Dow Jones Internet Index Fund (FDN C+) represents a good option for those seeking exposure to the growing AI business. It holds a solid 24.47% performance for the year and an impressive 82.31% since the start of 2016.

For a deeper analysis on individual ETF investments such as (FDN C+) or (UNG B-), use our ETF Analyzer Tool. You can select ETFs by Category or Type as well as add individual ticker symbols to compare performance, expenses and dividend yield among other metrics.

Medical devices have seen their viewership edge up 23% for the week as positive second-quarter results proved enticing for investors seeking exposure to this particular area in the healthcare sector.

iShares US Medical Devices ETF (IHI A-) perked up throughout the year, posting record highs on numerous occasions despite overall market trepidations. With a 20.63% gain since the start of the year and exposure to firms like Abbott Laboratories (ABT) and Thermo Fisher Scientific (TMO), the ETF might very well continue its march ahead.

Abbott Laboratories’ net sales rose by 17% to $7.78 billion while net earnings increased twofold to $733 million in the quarter ending June 30. Its medical device unit grew by 11.3% and contributed most to total sales with a 37% share of the entire business. Thermo Fisher also surpassed analysts’ estimates. With a 21.8% rise in revenue to $6.08 billion and a surge of 21.6% in its Analytical Instruments segment, the company fueled optimism in the medical devices industry, attracting $52 million in net flows to the ETF in the last two weeks.

Last week’s meeting between Trump and Juncker proved more fruitful than anticipated as both parties claimed victory. The European Union will avert additional tariffs on cars, a prospect that bodes well for German automakers while the bloc promised to boost imports of natural gas from its American ally. Technology equities remained in the spotlight for another week as earnings calls rolled in while artificial intelligence investments caught investors’ eyes with a higher degree of integration of AI in companies’ star products and services. Lastly, the medical devices sector enjoys sturdy growth worthy of one of the brightest spots in the healthcare industry in 2018.