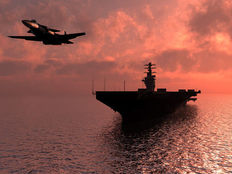 U.S. President Donald Trump continues to make waves in the financial community, one way or another.

Trump’s heated rhetoric regarding weak military spending by other NATO members spurred traffic to aerospace & defense stocks. Technology equities are again in the spotlight, as investors weigh the implications of weak earnings reports by Netflix and Facebook, and as they look forward to the results of other tech giants. Surprisingly, gold trended third this week, followed by real estate and emerging markets equities.

The aerospace & defense sector has seen its viewership rise as much as 189% this week as President Donald Trump increased pressure on NATO members to hike military spending. Trump called on all members to increase spending to 2% of each country’s GDP immediately, calling the current situation “unfair.” The U.S. spends 3.5% of its output on military, which is well above the European average of 1.5%. In Europe, only five countries spend more than 2% of their GDP, including the U.K., Estonia and Greece. Three other countries, Romania, Poland and Lithuania, are close to reaching the 2% threshold.

Germany, which has been on the receiving end of Trump’s criticism, spends just 1.24% of its GDP on boosting its military arsenal but promised to hike it in the coming years. Amid an ongoing spat between Trump and U.S. allies, fears that NATO will disintegrate have increased of late. The fact that Trump met with President Vladimir Putin and said that the summit was “better” added to the worries. Russia has been a long-time critic of NATO and its expansion, contending it is obsolete.

A potential crisis inside NATO will likely prompt European countries to increase spending as they can no longer rely on the heft of the U.S. In turn, demand for weapons will surge. iShares U.S. Aerospace & Defense (ITA B) has risen nearly 4% in the past 30 days, extending year-to-date gains to 6.5%. (ITA B) has largely whipsawed in 2018 and currently trades a little below the record highs reached in April.

After Netflix (NFLX) reported underwhelming results for the second quarter, investors turned their attention to other technology giants, wary that the string of disappointments may continue. Google-parent Alphabet (GOOG) reported better-than-expected earnings, triggering a bull run to a record high in technology stocks. Amazon (AMZN) is yet to reveal its results, while Facebook reported disappointing earnings on Wednesday after the bell. Technology equities have seen their traffic rise by 148% this week.

The Alphabet results were enough to squash fears of broad-based weakness in technology equities, with Invesco QQQ Trust (QQQ A-) advancing to record highs recently. In the past five days, (QQQ A-) has risen nearly 1%, extending year-to-date gains to as much as 16.5%. Despite a record fine in Europe to the tune of $5 billion, Alphabet surged to record highs after unaffected earnings of $11.75 per share were higher than estimates of $9.64 per share. Including the fine, Alphabet reported net income of $4.54 a share, down from $5.01 per share a year ago, when the firm was also hit by a big fine from the EU.

The performance of (QQQ A-) is expected to suffer at market opening Thursday. Facebook got slammed after it unveiled a dire earnings report, with decelerating revenue growth and lower margins, impacted by large investments in news products and lower user activity in Europe. Changes to Facebook’s privacy policy as well as the rollout of the European Union’s General Data Protection Regulation are expected to have a negative impact on earnings going forward. Facebook dropped as much as 20% in after-hours trading Wednesday.

Analysts expect Amazon to post another impressive quarter, with all businesses, including retail cloud and advertising, getting a boost. The company recently said that it reached the 100 million subscriber mark for Prime membership, after getting more members on July 16 than in any other day in its history. In addition, a litany of devices, including Fire TV, Echo and Instant Pot, were big sellers.

Gold has trended of late as investors are on the lookout for a potential safe haven as the trade war between the U.S. and other countries is intensifying. The performance of gold remains sluggish, as rising interest rates in the U.S. and a strong dollar had a negative influence. Gold has seen its traffic advance 142% this week, not far from technology equities.

Indeed, SPDR Gold Shares (GLD A-) is down more than 3% over the past 12 months and nearly 6% since the start of the year. Gold has recovered somewhat from its 2016 lows but is very far from its 2011 highs, when the economic crisis was at its peak.

Use our Head-to-Head Comparison tool to compare two ETFs such as (QQQ A-) and (GLD A-) on a variety of criteria such as performance, AUM, trading volume and expenses.

Gold could recover its lost shine in the event that Donald Trump’s trade war with Europe and China leads to a serious economic deceleration at home or even a recession, although Trump reverted his stance on trade with Europe recently. A dramatic scenario, however, is not on economists’ horizons, despite rising interest rates and a strong dollar. Although there have been some blunders, companies are still posting solid results, with many beating expectations.

Real estate ETFs have experienced 64% increase in viewership in the past week, far behind the top three trending topics. Amid rising interest rates, real estate ETFs have been shunned by investors because their yield becomes less attractive. Indeed, Vanguard Real Estate Index Fund (VNQ A+), an ETF with $31 billion in total assets, is down more than 2% since the beginning of the year and nearly 1% for the past five days.

For a deeper analysis on individual ETF investments such as (ITA B) or (VNQ A+), use our ETF Analyzer Tool. You can select ETFs by Category or Type as well as add individual ticker symbols to compare performance, expenses and dividend yield, among other metrics.

Perhaps more pressing is the fact that many real estate investment trusts trade at large discounts, with the average gap between the value of the assets and the stock price hovering around 16%. Managements are not doing enough to close the valuation gaps through asset sales and, thus, become targets of activist investors.

Emerging markets have seen their viewership edge up 53% for the week, as investors are slowly returning to the embattled sector. Vanguard FTSE Emerging Markets (VWO A), an ETF with $62 billion in assets under management, has surged 3% over the past week, trimming year-to-date losses to a little shy of 4%.

The investor optimism is not misplaced. China, which makes up a large part of the ETF, signaled stimulus measures in order to counter the trade war effects on the domestic economy. The Chinese authorities indicated they would not pursue deleveraging and financial risk control for a while, enough to give investors reasons to cheer. A broad-based stimulus effort is unlikely for now.