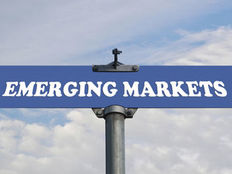 Emerging markets bear the brunt of angst over trade as President Trump threatens to slap another round of tariffs on Chinese goods.

Cloud computing trended thanks to skyrocketing cloud usage and record capital expenditures of the largest cloud infrastructure players. Argentina came third in the list as optimism surfaced after government and IMF officials signaled progress in the talks regarding the improvement of a standby loan agreement approved in June. Lithium oversupply in China has sent prices to 14-month lows as cheap, locally produced material hurts the international market. The U.S. dollar closed the list due to positive reaction to strong wage data and an overall upbeat jobs report.

Check out our previous trends edition at Trending: Markets Plough Ahead on NAFTA Breakthrough.

The largest ETFs tracking the performance of emerging markets equities suffered in 2018 on the back of a turbulent global environment as the U.S. took a protectionist stance in its trade relationship with partners like China, the EU, Canada and Mexico. As emerging markets stocks fell into bear market territory last week, viewership spiked by 294% for the MSCI Emerging Markets Index.

Tighter monetary policy in the U.S. was another driver for the sell-off in emerging markets as the Federal Reserve raising rates is propping the U.S. dollar, especially against emerging markets currencies. Various emerging markets economies have a high dollar-denominated debt burden, which becomes harder to repay while also preventing them from fortifying by buying commodities, also priced in the U.S. currency.

The latest piece of news regarding the additional $267 billion of Chinese goods targeted by U.S. levies dampened a flimsy rebound in emerging markets assets. President Trump announced new tariffs if China proves unwilling to negotiate and responds with its own levies. However, this measure seems unlikely, because, coupled with previously declared tariffs, this would amass to nearly all Chinese imports to the U.S.

The iShares MSCI Emerging Markets ETF (EEM A-) tracks the performance of 1,120 companies across the emerging markets world with a focus on technology and financials. The ETF suffered outflows of $5.1 billion in 2018 while diving below the 20% threshold last week as tensions regarding trade conflicts rose yet again.

More and more storage and computing takes place in the cloud so it is only natural that investments in higher capacities are on the rise. As cloud usage continues to surge, investors are on the hunt for opportunities, thus generating a 222% leap in viewership for the Cloud Computing ETF List.

Capital expenditures of top players in the sector marked another record in the first half of 2018 with $53 billion, a rise of 70% when compared to the same period of 2017. This is regarded as a clear indicator of the growth in cloud computing and digital enterprise while ensuring the likes of Alphabet (GOOG), Microsoft (MSFT) or Amazon (AMZN) a solid advantage in the future battle for global storage and computing capabilities.

Analysts estimate a few more years with a 50% advance in cloud service revenues, while search and social networking revenues are anticipated to grow by 25% and e-commerce revenues to expand by 40%. All of these push for higher spending on public cloud infrastructure.

The top ETF covering cloud computing, First Trust Cloud Computing ETF (SKYY B) is up 22,76% for the year and offers exposure to the largest players in the industry. It also includes the world’s leading data authority for the hybrid cloud NetApp (NTAP) and enterprise software colossus SAP (SAP).

Use our Head-to-Head Comparison tool to compare two ETFs such as (SKYY B) and (EEM A-) on a variety of criteria such as performance, AUM, trading volume and expenses.

The South American country with a tumultuous financial history struggles with a crisis yet again. Argentina has been in the news for the better part of 2018 with a roller coaster ride in currency value, interest rates and inflation numbers. Lately, a push to improve the IMF deal signed in June offered an impulse for investors to take another look at various opportunities, boosting traffic by 182%.

Although Argentina has been hit by a crisis in every decade over the last 60 years, President Macri is determined to break free from these cyclical financial crises. He is now targeting early cash disbursements from the $50 billion standby deal he negotiated with the IMF in June in an attempt to strengthen the country’s economic position.

This, however, may prove difficult as pressure mounts on Congress to pass Macri’s belt-tightening policies amid growing unrest on the streets of Buenos Aires. Planned cuts to public utility subsidies are set to keep inflation above 30% in the near term, while increased taxation of exports would add much-needed flows to the Treasury as exporters have the highest capacity to help the starved state’s coffers.

One way of looking at the troubled South American economy is by assessing the performance of the Global X MSCI Argentina ETF (ARGT A-). With a 28.7% loss since January 1, it shows the angst surrounding the economic environment in which component companies operate.

For a deeper analysis on individual ETF investments such as (ARGT A-) or (EEM A-), use our ETF Analyzer tool. You can select ETFs by Category or Type as well as add individual ticker symbols to compare performance, expenses and dividend yield, among other metrics.

Despite growing demand for batteries and various electronics, lithium prices are pushed down by an oversupply in China, especially for the battery-grade lithium carbonate. As such, interest in lithium almost doubled, investors showing concern over the falling prices of the commodity as well as the share prices of mining companies.

The market is witnessing the first significant supply response following the demand shock in 2015 when China endorsed the electric vehicle revolution. At the time, prices ran up from $9,500 per tonne in mid-2015 to $21,760 in 2017 only to come back down to $13,000 this August. At this point, following major investments in production facilities across South America, Africa and Australia, miners are having a tough time selling their commodity. The problem comes from China and its largely available material with cheaper production costs as well as a cautious stance from consumers who are shifting from piling up lithium to relying on minimal procurement on an as-needed basis.

Analysts are seeing a floor around current levels as producers would lose money if the price dropped any further so it might just be an opportunity to invest in a product like Global X Lithium ETF (LIT C+). The ETF covers companies involved in various aspects of the lithium industry, including Samsung and Tesla (TSLA). Although it has dropped by 19% over the last nine months, it may still be a good long-term investment choice as growth on the demand side will persist.

The dollar surely caused a myriad of problems across the world in 2018, hitting emerging currencies the most. Traffic surged by 60% as jobs data came out better than expected and increased the chances of an even tighter monetary policy sooner rather than later. Invesco DB U.S. Dollar Index Bullish Fund (UUP B) enjoyed the ride of the U.S. currency and marked a 4.7% performance for the year.

Job creation was strong, at 221,000 in August, while average hourly earnings were also solid, at 2.9% growth for the month on an annualized basis, the largest jump since 2009. Treasury yields jumped to 30-day highs while the U.S. dollar gained ground against its major counterparts. The Fed pulled the trigger twice already this year and is widely expected to raise interest rates twice more before the end of the year as data from the economy supports a further tightening of the monetary policy.

Emerging markets were in the spotlight yet again as investors were spooked by the latest tariff threat made by the U.S. president. Technology behemoths are spending at record levels in an attempt to secure solid positions in the cloud computing battleground. Argentina is grappling with a painful budget reform while trying to stoke inflation and prop up its currency. On the commodity side, lithium lost nearly half in value since the start of the year due to an increased supply in China, while the U.S. dollar continues its march higher, despite causing numerous issues in the most vulnerable economies around the world.