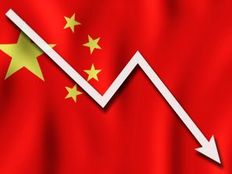 The constant strain of the Sino-U.S. trade relationship brought Chinese stocks to their knees in 2018 – the latest wave of selling sending mainland Shanghai Composite Index to levels not seen since November 2014.

Volatility-tied products are under pressure again as wild price swings have returned to the markets. U.S. homebuilders are going through rough times with disappointing numbers in building permits and housing starts. Rising funding costs are a major problem for indebted corporations, especially as U.S. companies’ debt load reached record levels of $6.3 trillion. Closing the list, FAANGs have a wall of worries to climb with Netflix hoping to lead the way up with surging revenue and subscriber adds.

Chinese equities were hit the hardest with every threat coming from the U.S. administration, most of which targeted tariffs and trade-related issues. Last week traffic for the sector surged by 42% as the benchmark gauge of mainland Chinese stock market, The Shanghai Composite Index, fell by nearly 3%, closing at 4-year lows.

Investors are jittery about the slowing economic activity in China as the latest GDP numbers showed a 6.5% year-over-year growth for the third quarter, the weakest pace since 2009. Although the miss was minimal, only 0.1%, officials sensed the danger of mounting fears in the investor community and promptly issued statements expressing support for the stock market as well as highlighting the solidity of economic fundamentals.

China’s securities regulator is determined to set the market back on track after an agonizing year in which its benchmark index fell by 21% in a continuous downward slope. The authorities said that share buybacks will be encouraged as well as other measures targeted at easing liquidity strains at listed companies.

Another reason for the sell-off in Chinese stocks seems to be the elevated level of shares that have been pledged by small companies as collateral for loans. More than 660 listed companies have dropped close to dangerous levels that will force them to sell these assets, according to local reporters. The pledged shares are valued at $650 billion, about 11% of the total mainland-traded A shares. As a countermeasure that could be followed by the central government, policymakers in Shenzhen have set up a $1.45 billion fund to save local companies through loans or direct investment.

The most popular and liquid ETF for investors wanting to gain long-term exposure to the Chinese stock market is the iShares China Large-Cap ETF (FXI A). Although, down 16% for the year, it trades better than its peers due to an exposure to financials, energy and communication sectors as well as large companies that are less likely to suffer the strains of cash-strapped small caps.

A sharp rise in volatility as measured by the CBOE VIX Index spooked investors and is reminiscent of the February 2018 roller-coaster ride in stocks. The VIX spiked 44% two weeks ago on the day the S&P 500 lost 3% in value and continued with another 25% the following day. This made investors turn their attention to the inverse volatility sector, pushing viewership up by 38%.

After calming down during spring and summer, the VIX has made quite a comeback. Wall Street’s “fear gauge” rose in a similar fashion to February’s move while stopping before reaching 30, sensibly lower than the ground-breaking 50 level touched at the start of the year. The stocks in the S&P 500 dropped in the 19 of 24 days since peaking in September and in 13 of the last 15 days, something that has not occurred since March 2009.

High yields, concerns over corporate profits, fears of lasting trade tensions and the lack of accommodative monetary policy all pose threats to the bullish picture. The volatility shock in February caused the liquidation of a popular product after it plummeted 80% in one day, namely Credit Suisse’s VelocityShares Daily Inverse VIX Short-Term exchange-traded note.

Use our Head-to-Head Comparison tool to compare two ETFs such as (ZIV B+) and (FXI A) on a variety of criteria such as performance, AUM, trading volume and expenses.

Stocks connected to the housing market have been on a slide for the better part of 2018 as homebuilders are having the worst year in a decade. Analysts are increasingly bearish on the sector as rising interest rates weigh on affordability and inventory climbs. Traffic advanced by 25%, as investors fret about the bleak prospects for the U.S. housing market. Indeed, analysts in two major banks issued downgrades for a number of construction corporations during last week.

The iShares U.S. Home Construction ETF (ITB A) lost a third of its value since the start of the year, the downward move accelerating over the last two months during which it shed 21%. The ETF may bounce in the near term as it flashes oversold signals but the fundamentals point to a depressed future.

For a deeper analysis on individual ETF investments such as (ITB A) or (FXI A), use our ETF Analyzer tool. You can select ETFs by Category or Type as well as add individual ticker symbols to compare performance, expenses and dividend yield, among other metrics.

Risky loans are everywhere in the corporate debt market and analysts are growing more anxious with every rate hike. S&P Global reported at the start of the summer that U.S. corporate debt reached a tremendous $6.3 trillion and the burden to service this debt gets heavier by the day. Bank loans have been in the news lately and traffic rose by 18% over the last week due to the upsurge in risk once the Federal Reserve hiked interest rates for the third time and signaled a willingness to follow a path of sustained increments toward a neutral interest rate.

Perhaps the most troubling aspect is the sheer size of U.S. corporate debt. The cash-to-debt ratio of speculative-grade borrowers stands at a record low of 12%. This is even below the 14% in 2008 and a sign that corporations have gotten so used to contracting big loans under extremely accommodative conditions that they did not tie their debt levels to their liquidity profiles anymore. This lending behavior has also been emphasized by the International Monetary Fund in a report, as a risk of a crash.

Invesco Senior Loan ETF (BKLN B+) offers exposure to leveraged loans and their attractive yields but requires risk tolerance from investors. Although above water for most of 2018, it dived in the last trading sessions and is now slightly in negative territory for the year. The ETF is comprised of debt issued by 16 U.S. companies with the credit rating varying from BB to below B.

Netflix’s (NFLX) solid earnings raised the bar for its peers, currently the only hope for a return of buying orders in a beaten market. FAANGs have been hammered of late, sparking a rise in viewership of 17%.

The tech-heavy NASDAQ Index shed 4.43% this Wednesday. Netflix posted a 40% beat in subscriber additions, a 30% beat in earnings per share and a revenue in line with estimates but still 36% higher than a year earlier. The stock soared on the first day but retracted all the gains as the market rout deepened.

Now the pressure is on for the Invesco QQQ Trust (QQQ B+) as its holdings are facing technical headwinds rather than fundamental. The ETF lost 6.7% in value over the last five days and expects the earnings reports of Amazon (AMZN) and Alphabet (GOOG), both due at the close of Thursday. The two are expected to provide fruitful results as they recently received positive earnings estimate revisions from Wall Street analysts.

Chinese stocks can’t catch a break in the dreadful environment engulfing the mainland market. The sell-off in the U.S. and European markets gained steam once again over the last few days, with volatility spiking toward the levels of October 10 and sending waves of panic across financial markets. Homebuilders are facing a grievous situation, slashing profit estimates as rising funding costs for buyers and input costs for their businesses bite. Rate hikes and 8-year highs in Treasury yields put risky debt burdens of companies in the limelight. Lastly, FAANGs strive to keep up with elevated expectations in a stormy climate.