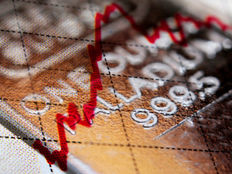 Trending: Palladium Shoots up on Supply Shortages and Strike Fears

Chinese equities staged an impressive rally of late, as Sino-U.S. trade negotiations marked significant progress at the last round of talks. Malaysia came third in last week’s list as officials decided to lift a three-year-old moratorium on bauxite mining. Telecommunication shares were also in the news thanks to AT&T’s final victory in a legal battle that blocked its merger with Time Warner. The British currency closed the list as the prospect of a lengthy Brexit delay prompted a rally in the pound.

The precious metal widely used in the automotive industry soared further over the last week as news of impending strikes in South Africa aggravated supply concerns in a market that has been suffering lately of a supply shortage. Traffic in the sector more than doubled over the last week as investors looked into palladium products to gain exposure to the rising asset.

Workers in 15 South African mining firms have sent notices of a strike, threatening to seize operations in a move that adds to wider industry issues. Fellow miners at gold producer Sibanye-Stillwater have already protested over wages and job cuts. As a result, palladium prices hit a fresh record high of $1,553 per ounce earlier this week, up more than 80% compared to August levels.

Home to the world’s largest platinum group metal’s deposits accounting for over 90% of global output, South Africa was particularly important at this point because normal palladium production is experiencing a shortfall. Norilsk Nickel, the world’s largest palladium producer, said this week that it expects the 2019 deficit to widen to 800,000 ounces, up from 600,000 ounces last year on tighter emissions regulations in all major markets and flat supply. Also, the Moscow-based miner said that strong demand in the automotive industry, mainly for autocatalyst converters, will prompt a 21% jump in consumption that will reach 11.2 million ounces for the current year.

The Aberdeen Standard Physical Palladium Shares ETF (PALL A) tracks the spot prices of the metal and has already gained 21% since the start of the year. Palladium has also benefited from the move away from diesel engines, coupled with a rising market in hybrid electric vehicles, which tend to be partly gasoline-powered.

Use our Head-to-Head Comparison tool to compare two ETFs such as (PALL A) and (EZA B-) on a variety of criteria such as performance, AUM, trading volume and expenses.

The Shanghai Composite Index is already up 18% for the year, having risen about 5% only in the past five trading days as hopes of a trade deal with the U.S. spurred optimism in the country’s financial markets. Traffic in Chinese equities surged 72% after officials on both sides of the Pacific signaled significant progress in the talks regarding the trade surplus China holds with its largest partner, the United States.

In a trademark tweet, President Trump said that the scheduled March 1 tariffs could be postponed as talks with the Chinese authorities are advancing towards a far-reaching deal that would end a trade war blamed for slowing global economic growth and disrupting markets. At the end of November, Trump and Chinese President Xi Jinping called a 90-day truce that delayed the tariff hike from 10% to 25% on $200 billion worth of Chinese imports.

Negotiations are said to include issues regarding the Asian nation’s treatment of state-owned enterprises, subsidy policies, forced technology transfers, and cyber theft, among others. The memorandums of understanding, expected to be signed between the largest economies of the world, will address issues ranging from structural reforms to trade and economic policies.

One of the most attractive products that gives investors an opportunity to gain exposure to the Chinese equity market, iShares MSCI China ETF (MCHI A), is up 15.78% for the year.

Another Asian nation has taken the headlines over the past week as officials in Kuala Lumpur said that the moratorium imposed on bauxite mining will not be extended after the March 31 expiry date. Malaysia saw a viewership rise of 68% over the last few days.

The Malaysian government decided to lift the ban from March 31 onwards as the strong demand in bauxite from China overshadowed the environmental concerns that were at the root of the 2016 moratorium. Malaysia imposed a ban on bauxite mining after unregulated mining and run-offs from unsecured stockpiles in the bauxite-rich central state of Pahang was found at the root of massive contamination of its rivers, water supplies and coastal waters, while respiratory problems and skin rashes rose to alarming levels.

Officials said that harsher mining rules will be imposed on companies in an effort to drive these operations towards more sustainable mining activity in the nation.

Some 432,000 tons of high-grade bauxite in storages at Kuantan port on the South China Sea is set to be exported. Before the ban, Malaysia was the biggest bauxite supplier to top buyer China, shipping 3.5 million tonnes per month at the end of 2015.

The iShares MSCI Malaysia ETF (EWM B+) advanced 1.7% on the news and holds a fragile 3.75% performance for the year. The ETF is mostly exposed to large-cap financials.

The telecom giant AT&T has finally won the war with the U.S. government over its acquisition of Time Warner as the Justice Department said it would not appeal the latest court ruling, which gave the green light to the $85.4 billion merger. Interest in telecoms rose by a third over the previous week as investors looked into products with large exposure to the media behemoth like the iShares U.S. Telecommunications ETF (IYZ A+). The ETF has AT&T as its No. 2 holding and posted a sturdy 14.36% since the start of 2019.

The judges that approved the terms of the deal between AT&T and Time Warner stated that government fears regarding a spike in consumer prices were unfounded, and decided to end the 15-month battle to block the arrangement. The two companies agreed to the transaction in October 2016 and closed it eight months later following another court decision in favor of the deal.

Elsewhere in the telecom industry, Europe’s leading mobile operator, Deutsche Telekom, said this week it expected a slowdown in earnings growth for 2019. The firm expects 2019 adjusted earnings before interest, taxation, depreciation and amortization (EBITDA) to advance by only 3%, down from 5% in the prior year. The company is set to complete the U.S. merger with Sprint, acquire Spectrum and roll out 5G services.

For a deeper analysis on individual ETF investments such as (UWT ) or (UUP B), use our ETF Analyzer tool. You can select ETFs by Category or Type as well as add individual ticker symbols to compare performance, expenses and dividend yield, among other metrics.

Reports on positive developments in Brexit talks between European officials and their British counterparts were a boon to the pound, which rose 3.4% since the start of last week and gathered growing interest in relevant products. The Invesco CurrencyShares British Pound Sterling Trust (FXB B) advanced by a comparable 3.2% over the same period, while traffic in related products upped by nearly a fourth.

The latest rise in value for the British pound was attributed to a report that revealed a worrisome U.K. government regarding a prolonged Brexit delay. The two-year delay that is expected to be imposed by the Europeans as an alternative to the British-desired “short, limited” extension to the March 29 deadline officials effectively puts pressure on Brexiteers to accept Prime Minister May’s deal. The pound is favored by any scheme that delays or cancels the divorce process, according to analysts.

Prime Minister May announced this week that should parliament vote down her proposed plan again, her government would be forced to ask for an extension in order to avert a painful no-deal exit. Another positive development was a reportedly softening stance from the influential European Research Group (ERG) of Conservative MPs towards May’s Brexit deal.

The tight market that drove palladium prices to new records on numerous occasions over the last few months was further emboldened by strike fears in South Africa. Chinese equities were energized by meaningful progress in trade talks with U.S. officials, while Malaysia entered the list with its decision to end a three-year ban on bauxite mining as the country seeks to resume exports to the commodity-hungry Chinese market. AT&T’s triumph over the U.S. antitrust bodies that tried to block its merger with Time Warner lifted the sentiment in the telecom sector. Finally, the British pound saw inflows as ongoing negotiations delay the Brexit process.