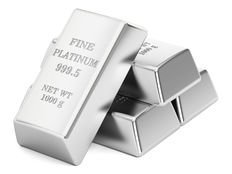 Platinum prices surged to 10-month highs after investors turned their attention to the precious metal as an alternative to the seemingly overbought palladium.

Platinum ETFs have seen strong inflows since the start of the year, with investors betting that the record-breaking palladium will slowly be replaced with platinum by automakers in an effort to reduce costs and address the supply shortage issue. As a result, platinum has seen its viewership more than double over the last week.

Analysts are suggesting a rebalancing is due because of the sharp contrast in market surplus for platinum versus a shortfall in palladium. The latest report by The World Platinum Investment Council estimated a platinum surplus of 680 thousand ounces for this year while expecting to see a massive deficit of almost 1 million ounces for palladium. As witnessed by investors, palladium prices skyrocketed and doubled in price since August while platinum only started its rise in February and currently holding a nearly $500 per ounce discount to palladium, or 35%.

Both metals are used by carmakers to build catalytic converters and although palladium is the preferred option for gasoline engines while platinum for diesel, it is estimated that roughly 5% of the required palladium will be replaced by platinum in the near future, given the hefty discount between the two. This would lead to a 14% increase in demand for platinum, an impetus for price and investment in the sector.

However, palladium prices have eased of late and staged a large painful decline, the largest in three years. A rebalancing takes time and is warranted by a persistent discount, as witnessed in the early 1990s when cheaper palladium replaced the more expensive platinum only to reverse course in 1999 to 2002 when platinum substituted for the pricey palladium. However, platinum prices may remain subdued in the short-term as recently signed projects like the 4-billion joint-deal between Zimbabwe and Russia may put downward pressure on the metal’s valuation.

Platinum ETF inflows have reached 666 thousand ounces in the first quarter, the largest expansion on record. Aberdeen Standard Platinum Shares ETF (PPLT A-) is the go-to product in the sector and already rose by 14% since the start of the year.

Both mainland stocks and large-caps traded in Shanghai have seen impressive inflows since the start of the year. Retail and institutional investors poured into Chinese stocks on the back of an improvement in market sentiment across the economy. Traffic in the sector rose by more than 50% over the last week.

Shares trading on the mainland Shenzhen CSI 300 Index climbed by 37% since the start of the year while companies under the Shanghai Composite Index only advanced by 28% this year. Funds like the iShares MSCI China ETF (MCHI A) have also benefited from the supportive environment, the fund most exposed to the likes of Tencent and Alibaba Group (BABA) rising by almost a quarter in value over the last three months and a half. Chinese tech giant Tencent is set to tap the dollar debt market for a 6 billion bond sale this week, marking the largest Asian auction in 2019 so far.

Analysts are citing tax cuts, improving financial conditions and a rebound in raw materials that spurred the demand for industrial restocking as reasons for the upswing in investor sentiment and the ensuing rise in the value of stocks.

Chinese manufacturing numbers came in surprisingly higher for March, The Caixin/Markit Manufacturing Purchasing Managers’ Index (PMI) showing a small expansion of 50.8, which is particularly important given the previous reading of 49.2, the lowest in three-years. Fears of industrial deflation abated while the projected unemployment surge may have been overplayed by markets recently, especially as trade talks with the U.S. are advancing and potentially heading to a favorable resolution. Use our “head to head comparison tool”:http://etfdb.com/tool/etf-comparison to compare two ETFs such as (MCHI A) and (BND A) on a variety of criteria such as performance, AUM, trading volume and expenses.

Oil has steadily risen since the start of 2019 and traders are using leveraged bets to profit from the incessant climb. Leveraged investments in oil have attracted more viewers of late as the tightening oil market led to princes reach levels not seen since late October.

Oil supplies from the Organization of the Petroleum Exporting Countries (OPEC) fell by 500,000 barrels a day in March to hit four-year lows. Saudi Arabia continued its output cut while Venezuela’s production dropped amid an ongoing economic crisis. The embattled South American producer has seen its oil output cut by 28% in March, adding to the cartel’s overall reduction.

Earlier this week, the U.S. reported oil inventories of 456.6 million barrels, the highest level since November 2017. In the meantime, U.S. oil production remains at record levels, pumping 12.2 million barrels a day, even as WTI prices surged 40% in 2019 alone. Accordingly, investors were lured by leveraged bets and turned their attention to funds like United States 3x Oil Fund (USOU ), an investment vehicle that offers 3x leveraged exposure to WTI and soared 160% this year. For a deeper analysis on individual ETF investments such as (USOU ) or (PPLT A-), use our ETF Analyzer Tool. You can select ETFs by Category or Type as well as add individual ticker symbols to compare performance, expenses, and dividend yield among other metrics.

The Asian behemoth’s unexpected recovery touched all corners of its economy as Chinese markets enjoy a respite after a tough 2018. With a more balanced exposure, but holding a tilt to financial and telecommunication large-caps, iShares China Large-Cap ETF (FXI A) rose by 16.5% so far in 2019 and are poised to gain further, especially in the case of a Sino-U.S. trade agreement. Investments with exposure to Chinese firms have attracted 42% more viewers last week.

The latest report by research firm China Beige Book showed the first-quarter rebound was based on a rise in credit that spurred revenue and profits but also investment and hiring. Despite its deleveraging pledge, the Chinese government encouraged banks to lend to smaller, privately-held businesses as the sector is the main contributor to economic growth and employment.

The lending cost has also increased, as a result of the growing corporate borrowing and also of the shadow banking, both reaching their highest points since the middle of 2013 and the second quarter of 2016, respectively. As liquidity plays such an essential role to the Chinese economy, the government may be forced to take further steps to increase the availability of credit, like the December announced “Targeted Medium-Term Lending Facility”, a special tool aimed at helping cash-strapped small businesses.

ECB pins down the Euro

The European common currency seems to have a rough start of the year as the bloc’s central bank is determined to take no risk with its monetary policy. The central bank’s governor, Mario Draghi sent a dovish message last week, enforcing the case of a prolonged stimulus and even further easing measures in case the European economies struggle to gain momentum. Products like the Invesco CurrencyShares Euro Currency Trust (FXE A) show the issues best, sliding 1.7% year-to-date.

The block’s manufacturing sector is still weak, risks of trade tensions with the U.S. persist while regional business activity already faces a significant slowdown. Earlier this week, the U.S. president announced $11 billion in levies on European Union products, as part of a trade dispute regarding aircraft subsidies. The situation may escalate as European officials responded and said a retaliation scheme was in the making. For more ETF news and analysis, subscribe to our free newsletter.

Platinum’s appeal to investors rose as the massive discount to palladium may point to a shift in industrial utilization and bring the market to equilibrium. Investors turned back to Chinese stocks as credit-fueled businesses may sustain the country’s growth perspectives. Substantial production cuts from the OPEC eclipsed the record U.S. output and prompted investors to take leveraged bets on oil’s run. Lastly, the euro struggles against the U.S. dollar as the area’s economic and political issues persist.