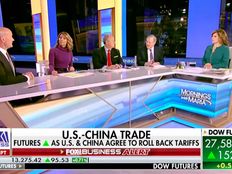 The U.S. and China have agreed to roll back tariffs as part of a phase one trade deal. The two sides are said to be eyeing a December signing date. ETF Trends CEO Tom Lydon stopped by Fox Business Network’s ‘Mornings with Maria’ on Thursday to discuss the China trade news and the state of the market.

In terms of where flows are headed, Lydon said investors are not too affected by the trade war, as markets are hitting new highs. However, he does see a significant shift coming regarding the 10-year bull market.

“Recently, we’ve seen more money going into value than growth,” Lydon explained. “More money has been going into international stocks when you check fund flows and ETFs versus domestic. It sounds right. Investors are looking for value where P.E. ratios are almost a third off the U.S. versus global, and when you look at value, a lot of stocks have been beaten up for the last 10 years; there’s some great opportunities there.”

When speaking to international trends, Lydon noted Europe and how Brexit has been a cloud hanging over everyone, but investors still need to continue investing. With companies still doing well from a profitability standpoint, especially when compared to the higher prices in the U.S., they are much cheaper.

Regarding small cap stocks, Lydon explains how they’ve been underperforming for 10 years, but they may be making a slow climb up.

“I think things are going to pick up,” Lydon adds. “Things always revert back to the means, and small caps tend to outperform large caps over time, but that hasn’t been the case in the last ten years.”

The Attractive Nature of Value Investing

Putting the trade wars aside, Lydon is asked his thoughts on the Fed lowering interest three times in 2019.

Lydon said going into equities hasn’t hurt anyone, but no one is getting paid for going into bonds currently due to poor yields.

As Lydon points out again, it’s value stocks currently working as the most reliable area. The disparity between growth and value stocks has been the worst in 30 years. So, that gap will close soon enough.

Looking at opportunities overseas, there’s an evident home country bias for many investors, showing how coordinated their portfolios are to the S&P 500. However, from a diversification standpoint, that can’t always hold. That in mind, investing overseas in emerging markets, for example, shows a lot of opportunity on sale.

Switching over to thoughts on zero commissions, Lydon notes the ease of a brokerage platform in that regard.

“Advisors can now invest their client’s money for zero trade, zero commissions, stocks, ETFs. When clients see little trade commissions in their portfolio, it doesn’t make them feel good. Now it’s down to not only low-cost ETFs that are a fraction of what mutual funds are, but also no trading costs. It gives them that added confidence.”

Additionally, Lydon confirms how markets do tend always to bounce back. He explained how it’s one of those things where a lot of smart people on Wall Street have appropriately bet on emerging markets for the past three years, despite the difficulty in beating the S&P 500. It will come around eventually though.

In terms of where to look when considering emerging markets, Lydon notes China, despite trade tensions, as well as India, which has been quite strong as well.

Lastly, in terms of the earning season in the US, Lydon notes how 70% have outperformed expectations, which is entirely consistent. The fact that there are fewer surprises and more confidence for investors has undoubtedly been helpful.

Watch Tom Lydon Discuss The Current Market In The U.S. And Abroad: