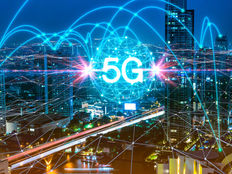 China has quickly emerged as a world leader in 5G spending and adoption. By 2025, China is projected to have over 400 million 5G users, accounting for 40% of total global use. At the same time, China is cultivating its domestic semiconductor production capacity through government policies and funding specifically for the industry. As stated in the “Made in China 2025” initiative, China aims to produce 70% of the semiconductors used domestically by 2025 and achieve complete import substitution by 2030.

One Giant Leap With 5G

“The advent of 5G is fundamentally changing the way people interact with technology and the world in which we live. China is the world leader in 5G adoption, which is providing a tremendous catalyst across various sectors and industries in China,” said Jonathan Krane, CEO of KraneShares. “We are proud to partner with the top-ranked research team at China International Capital Corporation (CICC) for KFVG’s index.”

For more information about KFVG, visit kraneshares.com/kfvg, or talk to your financial advisor.

The Value of Equal Weighting by Sector

This Managed Futures ETF Saw Only Inflows in June