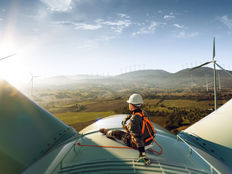 How Clean Technology Is Building a Sustainable Future

The climate summit is just around the corner, and as increasingly more data and research is being released on the state of our warming world, an increasingly grim picture is being painted. Industries have begun the switchover to operating in more sustainable ways, but the way forward realistically doesn’t lie in today’s technologies but in the innovations made that will help change emissions practices altogether.

Clean technology is a rapidly growing category that has seen an influx of interest and funding; the Biden administration is working to allocate a large amount of government spending in cleantech to help reach the Paris Agreement goals of net-zero carbon emissions by 2050.

The clean technology sector has enormous growth potential, bringing in $1-2 trillion green infrastructure investments a year, as reported by Goldman Sachs, one of several companies such as Microsoft and Google, that are all allocating funding into clean technology.

The way forward to reduce and ultimately eliminate emissions is through renewable energy sources such as wind, solar, and hydrogen. The ProShares S&P Kensho Cleantech ETF (CTEX) takes a unique approach within cleantech investing; the fund doesn’t invest in the end-users of renewable energy but the companies creating the technologies and products that are bringing about the renewable energy changes.

CTEX is an investment into innovation on the forward edge of the sustainable energy market. It seeks to track the S&P Kensho Cleantech Index, an index that tracks companies that create the technologies and products that will help create clean energy, which includes wind, solar, geothermal, hydrogen, as well as hydroelectric.

The Index includes companies across developed and emerging markets globally that meet certain market cap and liquidity requirements. Companies are categorized as Core if they derive the majority of their business from clean energy technology products or services, with all else falling under Non-Core. Within the two categories, the securities are equal-weighted, and then Core securities are overweighted overall in the Index relative to Non-Core securities.

Companies on the Edge of Clean Technology Innovation

General Electric (GE), while a major electricity distributor, is contained within the fund because of its work with the New Fortress Energy company to transition the Long Ridge Energy Terminal, which currently uses natural gas to supply energy to the Appalachian Basin over to hydrogen energy production, a carbon-free energy alternative. GE is carried at a 3.27% weight.

Major electric vehicle maker Tesla (TSLA) plans to create a “million-mile” battery to revolutionize the U.S. EV industry. The battery would last the lifetime of an electric car, and when combined with Tesla’s plan to create better, more cost-efficient lithium-iron batteries, it would bring the cost of owning an electric vehicle into the same price range as a combustion engine counterpart. Tesla is carried at a 4.77% weight.

Ormat Technologies (ORA) has recently expanded its McGinness Hills geothermal power plant. The power plant supplies electricity to Nevada and southern California. By growing its net capacity, it provides the residents it serves with long-lasting renewable energy options. Ormat is carried at a 3.41% weight.