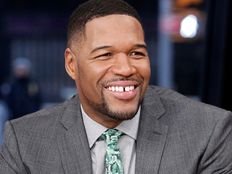 April 2022 will be all about Exchange, an ETF industry event made possible by ETF Trends, Advisor Circle, and ETF Database. In addition to the already impressive lineup of high-profile guests, including various CEOs and experienced investors, it has now been announced that TV personality and former professional NFL player Michael Strahan will serve as a keynote speaker for Exchange.

Before retiring from the NFL, Strahan spent his entire 15-year career with the New York Giants. He set a record for the most sacks in a season in 2001 and helped the Giants win Super Bowl XLII over the New England Patriots in his final season in 2007. In 2014, Strahan was elected to the Pro Football Hall of Fame.

Strahan has gone on to become a media personality. He’s a two-time Emmy winner and currently co-hosts ABC’s “Good Morning America.” Strahan also hosts the top-rated primetime game show favorite “$100,000 Pyramid” on ABC, which is currently in its fifth season.

Taking place from April 11–14, 2022, Exchange is a new large-scale experience destined to be the most important annual gathering for the advisory community and the ETF industry at large. For more information, or to register for Exchange, visit www.exchangeetf.com.