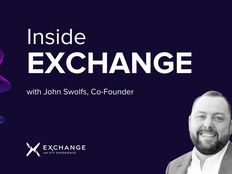 Inside Exchange with John Swolfs

Every week, Evan Harp sits down with one of the founders of Exchange to learn more about them, their perspective on life, and what they hope Exchange can bring to the industry. This week, he sits down with John Swolfs.

John Swolfs serves as the chief content officer and a co-founder of Advisor Circle. He previously worked as the CEO of Inside ETFs and as a business development associate at BlackRock.

Evan Harp: What is something surprising about you?

John Swolfs: I am obsessed with TikTok. I absolutely love the platform, I find it engaging. I cannot watch enough videos when it comes to food and cooking on there. I mean, absolutely obsessed to the point, Evan, where I literally have to put boundaries in place. So no TikTok before bed because I’ll stay up all night. I only try to watch it on the 30 minute train ride home from London Bridge back to my neighborhood. But I have to do a mental focus of saying, “Hey, let’s not pick up the phone and look at TikTok right now.” I’m just obsessed with it.

But another thing people might not know is that when I was in high school, for three summers I actually worked on a traveling carnival, got to really meet some interesting folks, and had some interesting experiences, to say the least. But those are some things that folks may not know about.

Harp: What inspires you creatively, spiritually, or emotionally?

Swolfs: For me, inspiration comes in a lot of different forms. There’s music, nature, people, I’m inspired by nature quite a bit. Just how beautiful it is. I can sit by the ocean all day, every day. I’m sure a lot of people can say that, but there’s just something that’s so refreshing and inspiring about sitting in front of the ocean, or being in the water, and just realizing how big and how powerful it is and how small we really are in the whole scope of things.

Not to mention, I absolutely love to body surf and ride waves. Just being out there in the ocean gives you that sense of purpose, and you’re usually with other folks. It’s just a great way to be out there and fill up your cup.

As far as other things, I’m a sap, a total sap. So things like concerts or TV shows, commercials, things like that, they can affect me emotionally. But then, creatively, a lot of that comes from listening to great music. Walking across the bridge on a bright sunny day listening to music, on the commute into the office, that gets me going, and that’ll really get the creative juices flowing. I want to sit down at the computer and write or tackle some of the stuff that takes more creative energy. For me, it really does come from people, nature, and music is mostly where I draw all my inspiration from — whether that’s creative, spiritually, or whatever.

Harp: What profession other than your own would you like to attempt?

Swolfs: I’ve actually attempted another profession. When I left college, I wanted to be a professional major league baseball umpire. I went down to school in Florida for five weeks, went through the training course and everything that you have to go through. There’s about 180 folks that go down each year and try to get into major league baseball’s program. I, unfortunately, was not selected to be one of the 15 the year that I went down there. So that dream was somewhat short-lived. But I’m a baseball nut. I went and worked in the Mets front office for two years to try and stay involved in baseball. The thing I learned quickly was, John prefers to watch baseball from the stands and enjoy the game rather than either being a part of it or working for an organization. So that was something that I did try.

If I was gonna do something that I’d never done before, I don’t know if you guys will ever remember this commercial for BASF: “They don’t make the products you buy. They make them better.” So I think I’d want to be an engineer. I’m just terrible at math, and that sort of stuff. I was always inspired by that commercial because it always had such great things like, “We don’t make the snowboard, we make it faster and lighter. We don’t make the cassette tape, we make it record longer.” It’s a cassette tape, so that tells you how long ago it was. But yeah, probably an engineer or something like that. As I said, I’m not the best at math, so probably not in the cards.

Harp: Why did you want to launch Exchange?

Swolfs: I think we all probably have a bunch of different reasons around why we want to launch Exchange. For me, I’ve been a part of the ETF industry since 2007. I’ve seen this community grow. I’ve seen it do amazing things, from democratizing access to every asset class to lowering the bar of entry for investors. So I want to be part of a team creating an ETF experience that was worthy of representing this dynamic, this engaging community. I think that we did that with Exchange. We’ve built a different ETF experience, I think, that better represents what the current ETF landscape is. Additionally, we want to bring the focus back on advisors, we want to make sure that we’re building content for them, that we’re addressing their needs. Because if you do that and advisors are better prepared, ultimately, their clients are better invested, which is a good thing, which means they’re more likely to reach their financial outcomes. For me, it really was just getting behind this amazing community and helping support it with a new platform that really does represent where the ETF industry is going for the next decade.

Harp: What are you most looking forward to about Exchange?

When you think about it, in the past two years since we’ve been able to get together, we now have a track record of active being in the marketplace. We have ETFs being run by AI and machine learning. We have different niche products, you’ve seen growth versus value, when you start to look at market conditions now, as the Fed is hiking, we’ve seen more volatility come into the market. Like I said, growth versus value, there’s just so much going on that I think it’s really amazing that we get to be the event and the platform to help advisors get educated on these topics and to stay current, to stay relevant, to make up for two years of time in four days. I think that is fantastic. That’s ultimately what I’m looking forward to.

But of course, seeing folks that you haven’t seen for two plus years now, getting to shake hands, have a nice conversation, catch up with folks on what they’ve been up to over these past years. It’s just exciting. It’s thrilling. I absolutely want to see the folks down there, but for me it really is around us having the first bite of the apple to really deliver some great educational content for our advisors and helping them and their clients, like I said before, be better invested and better prepared for the markets ahead.

Bullish Vibes on Tesla, According to Market Analysts

How Confident Are You In Recommending a Sustainable Withdrawal Rate?

GDIV May Navigate Coming Volatility Through the Decade