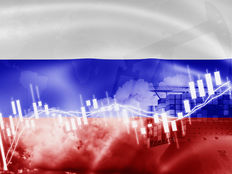 The Russian stock market is closed, and the Russian economy is rapidly slipping into pariah-state land, as the country is being cut out of central bank and commercial transaction systems around the world.

Meanwhile, ETFs tracking the Russian market, notably the VanEck Russia ETF (RSX B) and the iShares MSCI Russia ETF (ERUS B), are still trading during U.S. market hours. So what the heck is going on?

The reality of modern markets is that sometimes securities don’t trade. Every day, securities around the world simply don’t trade, whether it’s a China A-Share that suddenly decides not to trade because of bad news, or something broader like the closing of the Greek market in 2015 (which I covered here) or the Arab spring of 2011 (which I covered here). In each case, the ETF tracking the closed securities continued to trade, often at prices that didn’t, at first glance, make much sense. For example, here was EGPT back in the heat of it:

All this chart shows is that “the fund traded above its advertised net asset value” — a premium. It’s fictitious, of course — the real “value” of the Egyptian stock market was largely unknowable at the time.

And here’s what we see in RSK right now vs. the intraday NAV it publishes:

RSX owns a basket of some 60 Russian stocks, defined as stocks with more than 50% of their revenues or assets from Russia. However, most of its holdings are Depository Receipts that trade in London. So, for example, Gazprom trades in London as OGZD, and as I’m typing this, 26 million shares of the ADR have changed hands in the London session so far today (cut in half):

There are a few critical points here. The price of Gazprom, which is not trading on its actual market, is being determined by a Western market’s receipts. That’s the sentiment auction happening right now. At the same time, investors are using ETFs like RSX as a different, broad market sentiment auction while, again, the actual underlying securities aren’t trading.

There is absolutely no such thing as the “right” price in times such as this. Right now, at this moment, I have absolutely no idea whether Gazprom IRs in London are going to be considered “valid” either by the LSE or anyone else. While we are not on entirely unheralded territory, there is no map for how this unwinds. So what then is the “right price” of the ADR vs. the actual Russian company’s value? And what then is the “right price” for an ETF tracking those ADRs? Anyone who tells you an answer is lying.

Like literally everything that trades, the “right price” is the one at which you, the investor, decide to trade. In that moment, you and the counterparty are “right,” and everyone else is wrong.

Based on history, there are a few things we might see in the coming days:

I suspect I’m like most investors out there in that I don’t get particularly cute with my international exposure — I own big, boring broad index funds and try and forget about them as much as possible. Weeks like this are always hard, but they create opportunities to have meaningful conversations with your clients, your family, and your “investment pals” about not just what you’re invested in but why. The heat of the moment is rarely the right time to make a move. But it’s always the right time to learn more and pay attention.