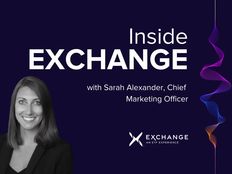 Every week, Evan Harp sits down with members of the Exchange team to learn more about them, their perspective on life, and what they hope Exchange can bring to the industry.

This week, he sat down with Sarah Alexander, the chief marketing officer for ETF Trends and ETF Database and one of the team members driving the marketing efforts for Exchange.

Evan Harp: What is something surprising about you that people wouldn’t know about right away?

Sarah Alexander: One of my first jobs was at the Dairy Hut in Pataskala, Ohio. It looks like one of those prefab gardening sheds that you can buy from Home Depot or Lowe’s. We served soft serve ice cream (over 24 flavors!), milkshakes, and coney dogs out of the “shed” window. The Dairy Hut was owned by a couple who’ve had the business in their family for generations. The owner was an actual milkman — he was probably one of few still in existence that delivered milk to businesses and people on a daily basis. I did that over a series of summers — it was fun. We used to experiment with new sundae ideas in our spare time — I actually made a couple sundaes that are still on the menu today. I think one of them was a thin mint blizzard — well, a “blitzer.” We got a cease and desist letter from Dairy Queen that summer because we were calling them blizzards — so for all those ice cream aficionados out there, beware of calling your concoctions anything Dairy Queen-related. I guess that was my first lesson in copyrighting (laughs).

I was also very involved in competitive dance. Remember those commercials where you could call and order a VHS video? And they would mail it to you? I saw one of those commercials for the Riverdance VHS and felt so compelled that I called my dad at work (which we were not allowed to do, for emergencies only) to ask him if we could order it. I thought for sure he’d say no — but to my surprise, he actually said yes! Later we went and saw them in real life — had front row tickets and everything. I was hooked.

I really wanted to learn Irish step dancing, but for some reason my mom signed me up for a tap class instead. From there, I took ballet along with tap. Then you take tap, ballet, and lyrical. Then you take tap, ballet, lyrical, and hip hop. Then it evolves to tap, ballet, lyrical, hip hop, tumbling, and cheering. Dance became my main extracurricular activity; I’d be at the studio from Monday starting at 4:30pm after school until 9 or 10 PM every night, Monday through Thursday. To pay for it — because everything is expensive in dance, from the classes to the costumes — I also assisted at the studio and helped teach little kid classes.

Evan Harp: What inspires you creatively, spiritually, or emotionally?

Sarah Alexander: I’ve had people in my life that have faced heartbreaking health diagnoses. And in the face of that adversity, they have chosen to demonstrate strength, poise, grace, and motivation to do something even bigger than themselves. For example, my uncle was diagnosed with ALS several years ago. He has since passed, but upon this diagnosis, he and his wife took their heartbreak and channeled that energy into creating something positive — they started the Live Like Lou Foundation. A lot of people, including myself, would probably struggle internally with facing your mortality so abruptly and definitively. Instead, he found inspiration from Lou Gehrig and how he faced his diagnosis. They’ve since raised millions of dollars to fund research for ALS and to support families of ALS, because it’s very expensive to live out the rest of your life with ALS. That is always inspiring to me, when people take adversity and flip it into something positive — to help their community, leave an impact and carry onward.

People that are confident in who they are, and what they believe in, are also inspiring to me. I envy bold people that stand in their truth and champion it in whatever they do. I see this in some of the Exchange folks. Matt Middleton, for example, is always true to his beliefs and what he’s trying to do in a given moment. He champions his values across everything that he does, and you can see that in the way he supports diversity efforts with Future Proof and Advisor Circle.

Evan Harp: What profession other than your own would you like to attempt?

Sarah Alexander: At some point, I would love to live a stress-free life. I’d love to be a bartender out of a tiki bar on the beach, meeting interesting people, not a care in the world. That would be the route I would take.

Evan Harp: What has been the most rewarding part of launching Exchange?

Sarah Alexander: It’s funny, I used to go to these conferences when I worked for an ETF issuer — and I recall being amazed and awed by the amount of work, coordination, and effort that goes into putting on an event of this scale. I used to think, “thank God, I don’t have to do this.” I only had to coordinate the issuer’s experience and exhibit (which was a feat in and of itself!) — versus putting together the whole conference. It’s been challenging, rewarding, and fun to be on the other side of that coin, to see first-hand all of the nitty-gritty details that go into putting on a massive industry event. It’s personally rewarding to know that even though I didn’t think I could accomplish something like this, now I’m part of the team making it happen!

Evan Harp: What are you most looking forward to in Exchange: An ETF Experience?

Sarah Alexander: Everyone’s already said that they’re looking forward to seeing people in person, but I’d like to echo that sentiment. Since I’ve joined ETF Trends and ETF Database, old colleagues and friends have found new jobs scattered throughout the ETF industry. It’ll be really fun to see them again, in their new capacities and with their new companies, and hear about the innovative projects and initiatives that they’re working on.

Secondly, I’m thrilled to see the vision come together. We’re pushing the boundaries — it’s not your typical conference, it’s not a stodgy suit and tie affair — it’s going to be different. Let’s bring experiences and activations on site. Let’s bring our brands to life. It’s going to be awesome.