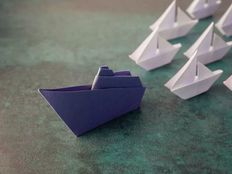 ROC Investments announced the launch of the ROC ETF (ROCI ), an actively managed ETF composed of companies selected based on the behaviors of their CEO and senior executive teams. Standing for “Return on Character,” the ROC ETF begins trading today on the CBOE BZX Exchange.

ROCI seeks long-term capital appreciation by investing in character-led organizations. ROC Investments believes that the market consistently misprices the value of exceptional character over the long term by not measuring it at all.

For the fund, ROC Investments has built an actively managed strategy to invest solely based on the character of corporate leadership. The core strategy will be to identify and buy U.S. companies with management behavior that exemplifies the highest level of character.

“The four pillars of ROC’s character model – Integrity, Responsibility, Forgiveness, and Compassion – are the same principles parents seek to instill in their children, and yet they are often found lacking in the financial world,” said Dan Cooper, founder and CEO of ROC Investments, in a news release announcing the fund’s launch. “Far more than exterior characteristics like education, tenure, politics, age, industry, or religion, it is these interior traits that determine character.”

Cooper added: “Our hope is that the ROC ETF will show that not only does character matter, but it is the best way to live and invest.”

ROCI is based on academic research by global consulting firm KRW International, which found a consistent, observable, and measurable relationship between senior leadership character and an organization’s ability to execute its strategy. Leadership teams with high character scores showed higher profitability (as measured by return on assets), higher workforce engagement, and lower levels of corporate risk.

The fund’s portfolio will generally hold 75 to 150 stocks with the highest Composite Character Scores, weighted to mirror the return profile of traditional, broad-based U.S. securities. Weightings will be evaluated and modified quarterly, and character scores will be re-evaluated on an annual basis.

ROCI has an expense ratio of 0.49%, according to its summary prospectus.