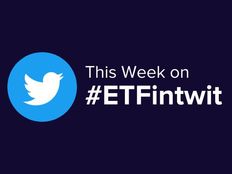 The good news is that no major financial personality said anything super dumb this week on Twitter. But there’s still plenty of, “Wait, what?” to go around.

Before we dive in, though, a programming note: We hosted our second Twitter Spaces this week, chatting about how to think about geopolitics when managing client assets, as well as how to talk about these macro events with clients worried about their portfolios. Catch a recap of that discussion, hosted by our head of research Todd Rosenbluth (@ToddRosenbluth), featuring Perth Tolle (@Perth_Tolle) the founder of Life + Liberty Indexes, which track emerging markets, and TKer founder Sam Ro (@SamRo), an expert in translating financial news into digestible takeaways.

Ritholtz Wealth Management favorites Ben Carlson (@awealthofcs — a member of our inaugural #ETFintwit #Top50!) and Michael Batnick (@michaelbatnick) are putting Web3 to work for charity. The pair launched a series of NFTs tied to their Animal Spirits podcast. All of the money from the sale of the tokens is going to No Kid Hungry — a favorite charity amongst the #FinTwit crowd.

The collection of NFTs dropped on Wednesday, March 30, and that same day, Batnick tweeted out that over $30,000 had been raised so far. Per the OpenSea page, there’s 206 owners so far. It’s a unique setup. Unlike the usual NFTs you see on Twitter, featuring designed images, the Animal Spirits collection offers token holders “12 months of access to exclusive live shows, the Doc used to plan the podcast, and a listener mailbag with video responses.”

Speaking of the Animal Spirits podcast, Carlson and Batnick are taping an episode live on stage at Exchange: An ETF Experience, which is coming up in just over a week in Miami.

Is It a "Stonk" Split, or a Stock Split?

Everyone’s favorite meme stock, GameStop, announced a share split this week, sending the stock higher. On a good day, stock splits are a special mix of catnip and kryptonite for the #FinTwit crowd, who like to remind their followers that stock splits don’t really change the value of the underlying company, even though everyone else on #FinTwit already knows that.

Everyone’s other favorite meme stock, AMC, also jumped on the news. It’s hard to pick a favorite hot take from a bevy of hot takes, but we’ll try. Here’s one of the smartest quants on Twitter, Corey Hoffstein (@choffstein), with on what’s driving the price action:

In Hoffstein’s defense, however, these stocks aren’t the only things headed to the moon without much logic driving them. He’s also trying to teach himself to fly on the yoga mat, which seems like a good place to leave it for this week.

You can also catch Hoffstein at Exchange: An ETF Experience, where he’ll be taping an episode of his podcast “Flirting with Models” live on stage. If you’re missing some of these Twitter favorites live at Exchange, feel free to give them a follow. We’ll see you here next week. Until then, happy tweeting.