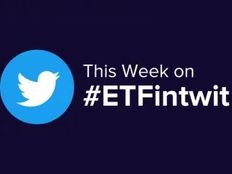 This week saw stocks sell off, which highlights just why our next Twitter Spaces, happening Monday, April 25, is so important. We’re digging into alternative assets and how advisors can use them in client portfolios to help weather weeks like this one. Mark your calendars!

For most of 2020 and 2021, we were treated to memes about how stonks (a deliberate misspelling from the meme crowd) only go up. But 2022 is bringing a big dose of reality to financial twitter, and our #ETFintwit favorites are rising to the occasion. Consider this dose of context (and optimism) from #ETFintwit #Top50 member and head of research at eToro, Callie Cox (@callieabost). Cox tweeted a reminder that statistically, we’re looking at at least one upward move of 2% or more in the weeks to come.

Others, just took it in stride with jokes:

It’s been a while since Twitter’s had this kind of start to the year, and we’re keeping tabs on the good, bad, and ugly reactions.

Of course, stocks don’t move in a vacuum, and many are attributing the action this week to the increasingly hawkish tone of Fed Chair Jerome Powell. He mentioned an overheated labor market while also saying the Fed would need to move quickly to tamp down inflation. He even got specific, saying that a half percent (50 basis point) increase is possible before fall.

After months (years?) of the Fed saying inflation was “transitory,” this move toward urgency had some on Twitter, like #Top50 member Jim O’Shaughnessy (@jposhaughnessy) joking that the Treasury Department might need to issue a $100,000 bill.

Stocks aren’t the only asset class falling on the news. Oil is also heading lower, closing out the week below $110 per barrel. Experts say the drop is due to demand concerns after both Germany and the IMF cut their growth forecasts this week. Oil prices in general, however, are getting less traction on #FinTwit on their way down than they did on the way up.

The golden stock of the pandemic is seeing red. During its earnings call this week, Netflix shared that when it asked users, “Are you still watching?” this quarter, the answer was a resounding no.

Shares fell more than 30% on the news that the streaming service is losing members. And, as the “N” in “FANG,” a major move in Netflix has the potential to shock more than just its immediate shareholders.

#ETFintwit was quick to comment on what caused Netflix to lose members, from price increases to the quality of the content. We even got headlines about how Netflix is prioritizing jobs within the organization, with some focusing in on how the company handles its engineers.

While the speculation and analysis is fun to sort through (especially if you’re invested in the company), we still like this takeaway from two #Top50 members, Michael Antonelli (BullandBaird) and Ben Carlson (awealthofcs). After all, context is key to most things in investing.

Time to Oust the Oracle?

CalPERS, the California Public Employees’ Retirement System, is supporting a move to remove Warren Buffett as chairman of Berkshire Hathaway, the company he started. While Buffett is undoubtedly a legend when it comes to investing, some view the “Oracle of Omaha’s” value-driven style as outdated. Buffett was notably late to invest in tech and internet companies, for instance.

Interestingly, though, CalPERS’ move isn’t tied to performance, but governance. The original push, filed by the National Legal and Policy Center, requests an independent board. Given that Buffett remains CEO of Berkshire Hathaway, he would be disqualified to serve as chair under those terms.

Most of #FinTwit seemed to find the move laughable, at least for the reasons provided. Here’s CNBC special correspondent Jane Wells (@janewells).

Others were quick to point out that the move was especially laughable given CalPERS’ own governance.

Regardless, there’s sure to be more attention than ever on the shareholder meeting taking place on April 30, and we may see more volleying back and forth next week leading up to the event.

We’ll be following all of the news for you, so check back for an #ETFintwit roundup of how things play out next week. Follow along with us on Twitter @ETFTrends.

Investors Are Soaking Up Emerging Markets Bonds in Early 2023

Consider This Active ETF for Dipping Back Into Growth

5 Questions to “Think Thematically” on Before Exchange