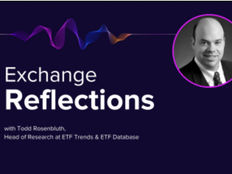 Exchange: An ETF Experience took place earlier in April. Evan Harp got the opportunity to sit down with Todd Rosenbluth, head of research at ETF Trends and ETF Database, to discuss the conference.

Evan Harp: What is one memory that stands out to you about Exchange?

Todd Rosenbluth: My memory is what happened outside of Exchange. One of the nights that we were at Exchange, we had a gathering of the #ETFinTwit group that I’m not officially a part of. What I remember is being able to meet all of the people who I’ve only known in the last couple of years through social media but have never directly had a conversation with or had a chance to talk to beyond 280 characters.

It was just a reminder of how big the connections within this ETF industry go beyond the asset managers and beyond people who I’ve known for years within the industry. Most of the meetings that I had at Exchange were with people who I’ve known for years, but haven’t seen in two years. This was a chance to unwind and have a drink with people who I only know of through their social media persona. It was great to just be able to connect that way with people like Nicole Casperson, or Jess Bost, or Phil Huber. I could name more of them, but I won’t. [Laughs] I’ll just drop a couple of names.

That stood out to me. What we collectively were able to bring together at this conference was people, and have them form bonds face-to-face.

Evan Harp: What’s one thing that surprised you about the experience?

Todd Rosenbluth: I’m just amazed at how well it went and ran! I’ve been attending ETF conferences for more than a decade when I was at a prior employer, and they were typically run by other companies. I joined ETF Trends and ETF Database three weeks ahead of Exchange and found myself behind the scenes. To use a different analogy, I had eaten in the restaurant for years, but now, all of a sudden, I walked into the kitchen and got to see how the meal came together. I got to see all the efforts that went into making the conference a success, and what everybody that’s spoken to me has said was a success. I had a front row seat to how the team kept the sessions running, made sure that every day all the things that attendees wanted were available, and that registration flowed and functioned.

I was surprised as well, once I got inside the kitchen, that it was working as the attendees were likely expecting it to work. I was just impressed by what was pulled off. To use another analogy, I showed up with 30 seconds to go before game time and just got to see how amazing the people that helped put this conference together were.

Evan Harp: What is something you learned at Exchange?

Todd Rosenbluth: It’s been two years since we’ve had conferences like this. There’s been a number of asset managers that came to market with new products, particularly with actively managed products. I was both impressed with their presence there but also that for sessions that were geared towards educating advisors about those products, how well-attended those were.

At the risk of doing a tutorial, 96% of the ETF assets are index-based or passively managed products. Active is a very small piece of the pie, and it’s easy to think that these new firms have come to market and no one is interested in their products. The rooms were quite full. I was attending some of those sessions, I was on stage interviewing some of those portfolio managers, so I learned that the demand is real. That was pretty cool to see in action. It’s not asking people in a survey, “would they buy an actively managed ETF?” They spent their time sitting in a room to hear from active managers because they want to consider buying them. That’s less of a survey, less theoretical, and more reality.

Todd Rosenbluth: It’s been a really tough start of the year for fixed income ETFs. Core bond funds are down, and people expect them to offer stability. I thought some of the interesting sessions were about what you do with your traditional 60/40 portfolio when both the 60 and the 40 are down in core U.S. equity and core fixed income.

I think there’ll be more talk about how you get income through different ways — high dividend-paying stocks, or senior loans, or alternatives? In the conference, it was a hot topic as advisors are trying to figure out how to position their portfolio in a rising rate environment and still be rewarding for their clients. I believe that’ll set the stage for what’s ahead in the second half of the year.

Todd Rosenbluth: Well, I guess it’s coming up soon! Ten months from now. I’m looking forward to what will be more normal.

Because it had been two years and because I had just joined ETF Trends and Database, which was co-running the conference, I didn’t afford myself as much time to have the conversations with advisors and folks within the industry. Most of those conversations were congratulations on the new job. So I’m looking forward to just having what is a “normal” conference attendance. Hopefully COVID stays as mild as it was heading into the conference and hopefully everybody is so safe and healthy — of course we still have to say that, but I imagine next year will be more normal. It won’t be done on fast-forward. I feel like many of the conversations that we all had were catching up and less the next level of that conversation. I’m eager to read that next chapter.

Investors Are Soaking Up Emerging Markets Bonds in Early 2023

Consider This Active ETF for Dipping Back Into Growth

5 Questions to “Think Thematically” on Before Exchange