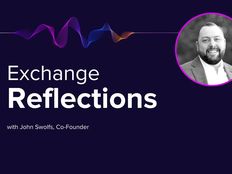 Exchange: An ETF Experience took place last month. Evan Harp got the opportunity to sit down with John Swolfs, the chief content officer and a co-founder of Advisor Circle, to discuss the conference.

Evan Harp: What is one memory that stands out to you about Exchange?

John Swolfs: I’m sure everybody’s going to mention the energy and the buzz of the attendees and all that stuff. But to me, the thing that sticks out to me is that Monday morning drum session going on — getting the attendees involved, getting that room nice and full, and building the community, building the energy that lasted throughout the three days of the event. I really enjoyed that. When we go from there, right into a great session with people talking about some of the biggest trends that are impacting everything, touching on Ukraine to the next generation of investor. To me, it was just a really good way to get things started on the right foot with the right impact and the right energy. That’s one of my fondest memories, when I think back on Exchange 2022.

Evan Harp: What’s one thing that surprised you about the experience?

John Swolfs: I know we hadn’t seen each other for two years, and I know the ETF industry is tight and a small-knit family and community, but I was just shocked at how close the community has really stayed. While they may not have seen each other physically in a large scale for two years, everybody has stayed in touch and continued to keep their friendships going, which I think is fantastic. Whether that was advisors, whether that was market makers, index issuers, it didn’t matter. Across the board, you have a different breed of people that are using and involved in the ETF industry, and I think that bond really unites everybody. It continues to make them push to create new, innovative products, it continues to push for better outcomes for investors, tighter spreads, whatever it might be.

I was just really impressed with how close the community has stayed. I think it’s just because those folks that are in the ETF industry are just a slightly different breed when it comes to thinking about investing and what they’re doing for investors.

Evan Harp: What is something that you learned at Exchange?

John Swolfs: ETFs have a long way to go. When you saw that slide on Monday morning that said that ETFs account for only 33% of the size of the mutual fund industry, it let you know that only one-third of the work is done and that there’s still a long way to go. There’s still a lot of growth out there. That, to me, stands out as something that is just truly remarkable because I’ve been in the industry since 2007. It feels like it’s matured and made it, because you have active ETFs and all of these other different products now that are in the market, and traditional players that had stayed on the sidelines have now entered it. So it feels like, “Oh, it’s come to fruition,” but it’s not even close. We’ve still got a lot of work to do so. That’s what I took away from Exchange.

John Swolfs: Yeah, there’s two that stuck out to me. I think they’re like clear as day as well. I might get in trouble for saying something like that. [Laughs]

I think active ETFs are here to stay for sure — that’s not going away. You see that with the T. Rowe Prices, the Capital Groups getting into the industry and putting products out there. Along with that, the idea of the fixed income ETF — I don’t think that’s going away. There’s been some talk that those may be the first things to get cannibalized by people tokenizing their debt. But when you think about the fact that like the bond king Jeff Gundlach is getting into and launching ETF products, they’re not going to do that unless they think there’s a real market for them to capture there. The same thing with the active ETF.

So that’s a real key trend that I think is going to take hold and continue to push the industry forward, the idea of more active players coming into the space and producing active products. I think the ETF wrapper is the true technology there that really allows them to bring their expertise to market now without such a high hurdle that the mutual fund creates for them. And then fixed income — everybody and their mom is concerned about inflation, rising rates, where are they going to go? I think ETFs will allow people to have some liquidity, some flexibility, be able to target where they want to be, whether that be from a credit or from a duration standpoint, and that’s not something that’s going away anytime soon.

John Swolfs: So I put my organizer hat on for this one and thought, “Hey, what are we doing? And what can we do better as the organizers of the event?”

We obviously want to improve every year. So what I’m looking forward to for 2023 is actually re-engaging with our audience here in the coming weeks. The reason I say that is we want to better understand what they liked about the event, what we can improve for them, what makes it a must-attend for them each and every year. I’m excited about the opportunity to improve on what we’ve built in 2022 and make 2023 even better. I know a lot of people are probably going to say that, and it’s not cliché, because, when you go out, you engage with the audience, you’re taking their feedback, you’re listening to them in order for them to come back to the event, you’ve got to put that into practice.

I think it really helps us build an event that matters to them, that they want to be a part of, if they feel like that they’re having some say in and contribution to building. I think that’s really important.

Evan, I would totally be remiss if I didn’t mention that I’d love to do another interview with someone like Michael Strahan in 2023. That was so much fun! He was fantastic. It was such a blast. I would love to do another one of those in 2023, and that certainly would be a highlight for me.

But absolutely re-engaging in the community and making sure that we build an event that continues to serve them is something that I’m excited about. Without having done it for the past two years, you forget about that component a little bit. We obviously wanted to build something different, which we did. Now it’s a matter of hearing from our audience and building what they needed more.