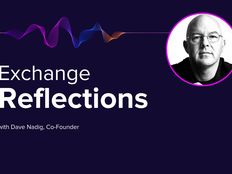 Exchange: An ETF Experience took place last month. Evan Harp got the opportunity to sit down with Dave Nadig, financial futurist at ETF Trends and ETF Database, to discuss the conference.

Evan Harp: What is one memory from Exchange that stands out to you?

Dave Nadig: The first full day of the conference, when the marketplace was open, I came downstairs, got out of the elevator, and walked into that exhibit hall, and there were 500 people already milling about. There was just this sense of everybody breathing deep for the first time in two years, because this is a small industry. We all know each other. Everybody’s got a pocket of people they know there.

That experience of just sort of entering that community, everybody being in that marketplace and how buzzy it was and how happy everybody was to be there — it was unlike any other conference I’ve ever been at, because most of the time people aren’t happy to go to a conference.

Evan Harp: What’s the one thing that surprised you about the experience?

Dave Nadig: How honest everybody was. I’m a pretty antisocial person. I had a lot of one-on-one conversations with people about how their experience in the last couple years has been, what it was like to now come to this. For a lot of people, this was their very first event they had done in literally years, and everybody was really unbelievably open about their personal experiences — whether they were feeling okay, or whether they were feeling anxious, or whether they were feeling ebullient being there — in a way that, frankly, is pretty unusual in a corporate environment. So I think that there was this sense that we’d all been through something that I was not expecting.

Evan Harp: What is something you learned at Exchange?

Dave Nadig: That you can get blisters walking around indoors all day. I love the hotel. I love the space, but boy is it spread out. I got in a solid five to eight miles of walking every day, according to my watch.

Dave Nadig: I think we had a lot of really clear-eyed discussion around crypto. There was a lot of talk about crypto, of course, but given what’s happened in the crypto market in the last couple of days, I feel comfortable that in all the sessions I at least attended or was part of, we presented crypto clear-headedly. We pointed out that yeah, it was a really interesting sandbox. But there were, in fact, some razor blades in it, and people needed to be cautious and learn more before they just jump in. I think that was good advice, and I think it was pretty well received.

Dave Nadig: I think 2022 was an enormous success, certainly by every yardstick we set ourselves, we hit all the metrics we wanted to hit. So it’s not like there’s a thing that I’m like, “We need to improve that.” But the first time you do an event in any space, you learn what it’s like to have 2000 people in that space all trying to do something at the same time. I think we’ll get a lot better at that.

I think we’ve learned the cool things we can do in some of that space. Having the marketplace in the middle and using that as a traffic thoroughfare, for example, that was a great thing that I think happened almost by happy accident. So now we’ll be able to really capitalize on those things that we’ve learned about the space itself, from the cabanas to the long walk to the big room.