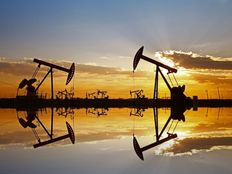 Crude oil and crude ETFs are cratering on Friday, as investors fear that a looming recession and hawkish rate increases will hurt commodities growth.

After nearly reaching its March high of close to $124 per barrel, U.S. benchmark WTI crude oil is cratering on Friday, having fallen over $9 in just several hours.

Crude oil plummeted by over 6.5%, dragging down crude ETFs such as the United States 12 Month Oil Fund (USL B+), the iPath Pure Beta Crude Oil ETN (OIL A-), the United States Oil Fund (USO B), and the ProShares Ultra Bloomberg Crude Oil (UCO A). While most of the ETFs lost over 4.5%, UCO is down over 9.5% due to its double leverage.

With inflation at levels not seen since the 1980s and the Fed making the largest rate hike in almost 30 years, investors are bracing for a recession and are still reeling from the most exorbitant gas prices in history.

“While many see aggressive rate increases as key to curtailing rampant inflation, accelerated hikes also raise the risk of pushing the broader economy into recession as higher rates curb growth,” said Robbie Fraser, manager, global research and analytics, at Schneider Electric. “For crude, that’s keeping demand concerns in focus, particularly as consumers in many cases are facing record prices at the pump in the early part of the summer driving season.”

The White House has been “increasingly critical of crude producers and refiners as prices continue ticking higher, with recent reports suggesting the U.S. could look to cap the exports of products like diesel and gasoline,” said Fraser in a daily note. However, “ultimately, lower prices will likely need to come from the usual fundamental factors rather than temporary legislation.”

Technical chart resistance, as well as weakening demand for oil, could also be playing a role in the decline, as coronavirus cases are ticking up, creating concerns that global shutdowns may be coming.

“Short-term technical outlook has weakened following several failed attempts to break higher, but given the tight supply outlook, highlighted by the IEA earlier in the week,” Saxo bank strategists said.

The International Energy Agency earlier this week also warned that “global oil supply may struggle to keep pace with demand next year.”

Chart of the Week: Advisors Pessimistic About Smaller Investments Next Year