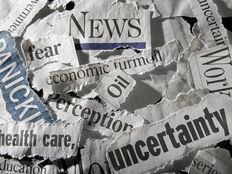 Michael Arone: Is Bad News Priced Into The Markets?

The first half of 2022 was filled with headlines that sent equities into a bear market and fixed-income return indicators like the iShares Core U.S. Aggregate Bond ETF (AGG A) into correction levels. But what if the second half of 2022 produces some positive surprises?

This interview has been edited for clarity and brevity.

Dan Mika, Contributor, VettaFi: In your latest note, you’ve raised the question as to whether or not the market has priced in all the bad things that happened so far this year economically.  What is your view on the potential for upsides, and how much relief do you think upside surprises can provide?

Michael Arone, Chief Investment Strategist, State Street Global Advisors: Typically, you can get a few bear market rallies amid a downtrend, so I do think that we could see some rebound in stocks throughout the summer. I think the challenge remains that some of the data, particularly the economic data and inflation data will continue to be a challenge for markets to move too decisively forward. I think that the Ukraine-Russia conflict is likely to be protracted, there doesn’t seem to be a resolution there anytime soon.

One of the reasons why I say that is we haven’t seen the typical sign that we see at bottoms, like the VIX breaking through the 40 level, or the capitulation selling that’s normally associated with a bottom. Lastly, oftentimes in a bear market, stocks on average decline by about 35% or so. So far, from the S&P’s height to its low, it was down about 24% or so. I do still think that on the balance, there’s likely to be additional volatility, and for the market to suffer a little bit more before we reach a more durable bottom.

Mika: You mentioned uncertainty, and clearly this is a very uncertain situation on multiple fronts from macroeconomics to geopolitics. What do you think investors and advisors should take note of if they’re trying to position themselves for a relief rally, whether over the short term or potentially over the longer term in case of a cyclical recession?

Arone: One of the enduring lessons from the pandemic is that the stock market is not the economy, and vice versa. Investors in the stock market are a forward-looking mechanism. We observe that at the peak of the pandemic, when the challenges were at their highest level, stock markets were rallying aggressively.

I do believe that the stock market and investors will begin to price in a recovery far before the economic data suggests that we’re there. Typically, what performs well coming out of a recession and a bear market and into a more lasting bull market early on is value and small-cap stocks. Both are inexpensive, have good earnings growth prospects and they both tend to be early leaders and in the beginning of an economic recovery.

I think the biggest thing that investors need to look for right now is the Fed’s preferred measure of inflation, which is the core Personal Consumption Expenditures index, and making sure that it is getting closer to where the Fed is bringing the Fed funds rates. If that gap begins to close, it suggests to markets to investors that the Fed’s goal of stabilizing prices is working, and therefore they’ll be getting closer to ending their tightening policy. If that gap stays at a high level or even widens, I do think that will continue to cause additional volatility in markets.

Mika: Let’s take the flip side of that discussion. The Fed does not have control over the supply side issues that are contributing to inflation. Let’s say the next time that we get a PCE print that shows inflation is still accelerating. How much does that play into the idea that all these negative factors in the market are already priced into stocks if there’s another nasty surprise waiting in the second half?

Arone: I do think that part of the volatility in markets throughout this year is the very fact that the Fed’s terminal rate continues to be a moving target. I think when the Fed started to use forward guidance to warn markets that it was going to tighten monetary policy, the thinking then was that the Fed funds rate would top out around 2.25%. Then we saw China’s zero-COVID strategy, the Russia-Ukraine conflict, and the continued aftershocks of the pandemic. We continue to see disruption to supply chains, and inflation remains stubbornly high. As a result, markets repriced a higher Fed funds rate to more like 2.75% to 3%. That repricing was incredibly disruptive to markets, most notably to bonds as rates rising rapidly puts downward pressure on bond prices and unprofitable companies.

Then we got in June an unexpected surprise in top-line CPI figures that actually accelerated. I think the investors had bought into this idea that we had reached peak inflation, and this number refuted that, and the University of Michigan’s forward inflation expectations rose. That data spooked the Fed. Now, interestingly enough, the market has begun to price this idea that the Fed started to raise rates too late, and as a result, they’re now tightening aggressively into a cyclical slowdown, or maybe worse, a recession. Now you’re starting to see interest rates fall to reflect the potential recession. So this entire volatility around where the Fed policy rate will end up has created uncertainty in the market.

Mika: You mention that there may be a rebound after the midterms in November. How much does the outcome of the election play into how you’re considering the market’s forward looking-sentiment, especially when so much of what’s causing all this angst in the market and the broader economy is outside the control of Congress?

Arone: The elections themselves, I don’t anticipate will be a major game changer. I think the consensus view is that the Republicans will win back the House, the Senate is a bit of a coin toss, and the outcome will result in additional gridlock coming out of DC, which historically, markets have applauded. The ability for one party or the other to enact too much of their most aggressive policy agenda will be limited, and markets will cheer that. But the election in and of itself, I don’t anticipate to be a big challenge.

One of the things that’s been interesting is that in midterm election years, on average, the S&P 500 drawdown is about 19%. We’re in that ballpark. The reason I chose it as a milestone is historically post the election outcome, markets rally aggressively into year end.

The Chinese Communist Party is also having its annual meeting this year, and it’s expected that Xi Jinping will secure a third term, which is somewhat rare. Oftentimes, post the Communist Chinese communist party meetings, there’s a rally because they typically introduce some monetary policy, some fiscal policy on that agenda.

I think by that point, the inflation data will begin to roll over, suggesting that the Fed may be getting near the end of its tightening cycle. You’ll be past the July meeting, past the Jackson Hole economic symposium where the Fed typically foreshadows where they’re headed with policy, and you’ll be past the September and October meetings. I think the Fed may at that point begin to slow down the pace of rate hikes, and think that at that point, markets could begin to be pricing in a more robust economic recovery at a time that’s seasonally attractive for markets.