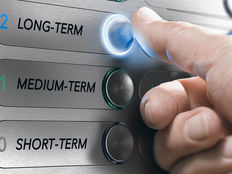 There has been increased interest in short duration bonds so far this year as investors look to reduce their interest rate risk. TLT is a long-term bond and, like much of the bond space, is down year-to-date, over 20% as well as being 40% off its 2021 highs.

“The idea, Chuck, is that at one point in time, rising rates are going to have to end. There’s a lot of conversation, a lot of discussion, a lot of concern that we may go into recession,” Lydon said. “If we do go into a recession, what’s going to happen? Well, the Fed will probably start cutting interest rates.”

“We really haven’t seen this type of opportunity in a long period of time,” Lydon explained. “We might see rising interest rates well into ’23. However, if we do see a recession, and if the economy slows down, and if inflation gets back under control, we’re going to see reduced rates by the Fed at one point in time to stabilize the market and that’s going to be great for long bonds and TLT.”

While it is possible to instead play the 50-day moving average, the 200-day smooths out a lot of the volatility and noise that the 50-day might have.

It’s a long-term trend play on a space that is currently down for now and using the 200-day could be a marker that long bonds are beginning to recover and provide an opportunity for advisors and investors that might have sold fixed income allocations this year.

“If you’ve sold your bonds or you haven’t bought any new bonds in the last couple years and you’ve got some cash that’s on the sidelines, that might be the allocation that you put in,” Lydon said.