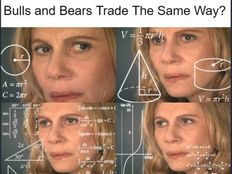 The Math Behind Single-Stock ETF Rebalancing

With the launch of AXS Investments’ single-stock ETFs, there’s been a veritable mosh pit of news coverage (thanks to the SEC dissing them on the way out the door) and public opinion. I thought it might be helpful for some folks to understand exactly what has to go on under the hood to keep these products doing what they say on the tin.

Rather than use hypotheticals, let’s just look at the most popular of the new launches: the AXS TLSA Bear Daily ETF (TSLQ ). Putting aside the rather cheeky nod to the TSLAQ short-selling/conspiracy movement, the fund is a great example of how these products will work.

When you buy TSLQ (or any other ETF), you’re not “putting money in” it. You’re buying shares of TSLQ on the open market from someone who has some shares they’re happy to sell you. Most often, this is a market maker either sitting on some amount of inventory or an authorized participant who can do a creation at the end of the day to make new shares to sell to you. If that happens (which it only does when there’s more demand than the market maker can naturally handle), it’s even easier for the TSLQ Authorized Participant than most because they simply put in the order to do a creation unit with a big chunk of cash. Overnight, they’ll magically receive new shares of TSLQ to cover any that they owe buyers like you.

Put another way, creating new shares of TSLQ is much more like how new shares of a mutual fund are created — cash goes into the portfolio manager, which they then need to “put to work.” TSLQ is also super simple there because all it will ever hold is a giant slug of cash and a swap or two.

The truly paranoid could worry that there’s some exposure here to the swap counterparty going bankrupt in the middle of the day before the swap gets settled. Still, in practice, I’m unaware of any leveraged and inverse swap counterparty ever failing to settle. The worst-case scenario, however, is just the loss of one day’s returns, even if the swap counterparty just vanished into thin air. The cash is still sitting there on the books every day.

So looking above, why does the cash balance not perfectly match the value of the swaps as of the close on July 19, which is what the above data suggests? Likely because this was in between the end-of-day NAV being struck and the new exposure being set for the following day.

Every day, after the bar bet settles, each fund needs to reset the total value of the swaps so that tomorrow, if TSLA goes down by 1%, shareholders of TSLQ will go up by 1%. Here’s how I go about tracking that (something I got used to doing running up to Volmageddon when the VIX ETPs were having big impacts).

(NOTE: How swaps are technically accounted for on the books and how individual swaps are settled daily is itself a surprisingly complex topic. If you’re an insomniac, I’d start here with an International Swaps Dealers Association guide. I point this out to fend off the ‘but Dave!’ I’ll inevitably get because the above skips a dozen book entry steps to get to the rebal-trade number, which is what we really care about. Nothing brings out the truth like being wrong on the internet!)

Put another way, on a day that the underlying stock goes up, TSLQ has to be a net buyer, like clockwork. People’s brains break because it doesn’t matter what sign you put on the leverage factor; you’re still a net buyer. Imagine that AXS launched a 1.5X Bull Daily version of this fund. Instead of an inverse swap, the fund just sits on the cash and enters into a 1.5X swap.

In this case, the swap went in favor of our imaginary 1.5X Daily Bull, so the NAV of the fund went up, but that again means they have to get more exposure at the end of the day, which is the same as “lightening up” a negative exposure. That’s why we refer to all leveraged and inverse products with scheduled reset periods as “procyclical” — they (through the counterparty hedging) are always buyers on up days and sellers on down days. (None of this is a discovery, for what it’s worth. Pointing out the procyclicality leveraged products is almost a closet industry academic finance.)

So What, Big Deal?

This is a classic case of something that isn’t an issue until it is. With $15 million in assets, there’s absolutely no way TSLQ will influence the pricing of the $23 billion that changes hands of TSLA stock daily. TSLA regularly trades 3–4 million shares in the runup to the close. So we have to imagine a world where either one of these single-stock products absolutely moons or where there becomes a mismatch between the dollars in the ETP complex and the natural volume in the underlying stock. If, for example, TSLQ had 15 billion instead of 15 million, then the above trade would be about a quarter of a million shares into the close — a number that, if you know it’s coming, probably matters, especially if it’s every single day and always in the direction of that day’s performance. One has to imagine it’s exploitable. Mechanical trading nearly always is.

For now, we have a handful of products tracking extremely liquid underlying securities with low assets. The sky is most assuredly not falling. But imagine if these products existed in several flavors for every stock in the S&P 500? What happens when a stock becomes a meme-darling, and the liquidity flows into the geared products out of proportion to the underlying stock? The short answer is, “more end-of-day volatility,” and the long answer is, “who knows, it’s not like anyone expected Roaring Kitty to blow up Gamestop.”