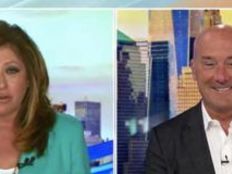 Tom Lydon on "Mornings With Maria"

VettaFi vice chairman Tom Lydon appeared on “Mornings with Maria” to discuss the turbulent year, the market rebounds in July, and the political tensions in China as Pelosi prepares to visit Taiwan.

July saw a market rally, with Lydon noting that the Nasdaq-100 was up 12% on the month. “Nasdaq stocks have really been pounded since first quarter of last year, but investors are resilient. I think there’s more optimism that the Fed is doing what it needs to be doing so far.” Lydon continued, saying, “Those that bought at the dip have been rewarded. When you look at ETFs like the Invesco QQQ Trust (QQQ B+), you still have opportunities to buy in low.”

On Friday, a jobs report is expected to show 250,000 jobs being added to economy, with unemployment holding steady at 3.6% amid the backdrop of rising rates and threats from China. Lydon observed that China has gone through a lot regulatory strain. “When you look at what’s going on with Pelosi’s trip to Taiwan and saber-rattling, that’s not going to affect things in a positive way,” Lydon said, noting that China depends on foreign investors.

Pivoting to labor, Lydon said, “Seeing the unemployment rate at 3.6% and jobs available at 11 million… That’s going to do a lot to support wages. Especially on the lower-paid end, we need that, which is not going to do a lot to help inflation numbers.” Optimistically, Lydon said it was possible that we’ll see a “Goldilocks situation” where inflation comes down but stabilizes at 5%–6% for a number of years.

Fox Business host Alex Sanchez asked Lydon where and how the average American family can keep financially afloat in these complicated times. Lydon replied, “Big fan of ETFs. It’s been really tough to beat the S&P 500 coming out of the financial crisis. If you just stay in for the long haul, you should be fine.” He added, “Technology stocks are the future, so the S&P is not just going to help you there, look for Nasdaq-100, I think you’re going to continue to do well.”