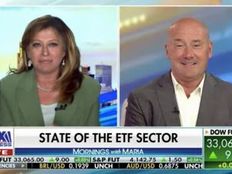 Tom Lydon appeared on “Mornings with Maria” with Fox Business’ Maria Bartiromo, to talk about the state of the markets. After a rocky start to the year, the markets have roared back to life.

Lydon observed, “The first four months, people were selling growth, they were selling long bonds, but since the low in June, they are back into growth in a big way — almost 10 billion dollars came into the top three S&P 500 ETFs.” Growth stocks have seen a massive surge since bottoming out in June, which Lydon thinks is lifting investor sentiment, but the sentiment isn’t the only thing soaring. Technical is also looking solid.

“From a technical standpoint, we got really close to hitting the 200-day moving average on some of the major market indicators,” Lydon said. “It kind of faked it and went south, but if we see that happen in the coming weeks, especially before Labor Day, that’s going to bode really well for the markets as we get into the fall.”

With the Fed raising rates, the IPO market is facing turbulence. However, banks are doing well, according to Lydon. “Banks do much better when rates are higher. Preferred ETFs have actually attracted a ton of money lately as yields in some of these preferred ETFs are up 6% to 7%,” Lydon said, noting that investors are diversifying away from the bearish outlook that dominated the early quarters of 2022.