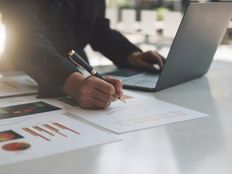 A well-established core fund, IWO is worth a revisit due to recent market conditions. “There are major trends in growth that may be redeveloping. Coming off the June 16th low, we’ve seen some really good performance in large cap and small cap,” Lydon said, continuing, “If we look at the charts historically, small caps do better than large caps over time.

Currency is another factor to consider as the dollar grows stronger. According to Lydon, “Small cap companies tend to do most of their business in the U.S. mega-cap companies are international in nature.” The strength of the dollar means that companies can purchase overseas services for less than an international firm, providing a bonus for U.S.-based companies.

Lydon noted, “everybody does have some small cap, but compared to ten years ago, they have a lot less allocation.” The historic strength of the S&P 500 in the last decade has caused some investors to shift toward large or mega-cap companies. He sees a tilt toward small caps as a potential diversifying tactic.

If the June lows hold, Lydon anticipates growth outperforming value on the way up. If the markets go sideways or down, value will kick in. “Small caps are on sale by 20% compared to their S&P 500 counterparts,” said Lydon.