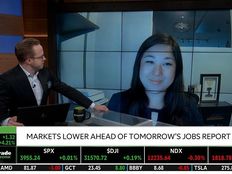 Closed-end funds are an attractive structure for those looking for yield in the market.

Investors in CEFs are not necessarily allocating to the structure for the total return potential but rather valuing CEFs for their income-generating properties as many have a primary objective of producing high current income, Roxanna Islam, associate director of research at VettaFi, told host Oliver Renick on Thursday’s TD Ameritrade Network’s “Market on Close” segment.

CEFs differ from open-end funds as the structure raises capital by issuing a fixed number of shares through a single IPO and then invests that capital in stocks, bonds, or other securities.

In the current environment, Islam said investors are concerned about CEFs sensitivity to rising rates because many of these funds do use leverage.

“When you have rising rates, borrowing costs can also go up, and that could deteriorate funds’ earnings, which could threaten distribution payments,” Islam said. “Typically, this means that when you’re in a rising rate environment, you do expect some funds to enact cuts.”

Islam warned that it’s easier to pay closer attention to the bad news; looking back at the broader CEF industry, distributions have actually held up well and have been more stable over time than many would expect.

“We look at…the S-Network Composite Closed-End Fund Index, which focuses on CEFs with taxable yield. When we looked at this through the last series of interest rate hikes that we had from 2015 to 2018, it was really interesting because we did see the prices and the asset values fall, and that was in their early days, and a lot of that was based on that investor sentiment,” Islam said. “We did see some dividend cuts in the early days, but they weren’t really as much as I think a lot of people expected. In 2016 and 2017, you had maybe 5–10% distribution cuts across the board, and then from 2018, you saw that flattening.”

“I think relative to what people expect, these distributions tend to be more stable over time, especially when you look at those yields,” Islam added. “As a percentage, you saw them hover around that mid-8 % range over the past ten years or so, and that’s a much larger rate than many of the other asset classes out there.”

Islam notes the Invesco Senior Income Trust CEF VVR and the PIMCO Dynamic Income Opportunities Fund PDO are two income-generating CEFs that have exposure to fixed income but are not as sensitive to rising rates. PDO even raised its distribution by 8% a couple of months ago, Islam said.

“When you’re looking at a fund like this, you can actually see that their earnings is actually much higher than their distribution rate and that that percentage is well over 100%, meaning earnings really do cover the distributions well,” Islam said. “They also have a sizable net income reserve, which means that even if earnings do deteriorate for a few months or a few quarters, then they do have sort of a backup reserve to pay that.”

Isam said when you’re looking at funds, you would tend to look for ones with higher earnings-to-distribution coverage ratios and those that invest in certain asset classes.

3 of the Most Popular Equity Income ETFS

As the Fed Hikes Rates, Invest in Free Cash Flow

2 Economists and a Hangover

With BWEB, Bitwise Invests in Web3

2 ETFs to Look Into as Short-Term Yields Climb

India to Have a Billion Smartphone Users by 2026