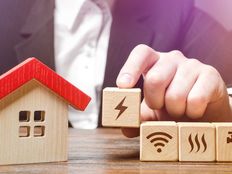 Right now there isn’t just a narrative about recession – energy is top of mind. “Here in California they are talking about brownouts with this big heat wave we’ve had,” Lydon said, noting that utilities also do well during fall and winter months due to increased demand for electricity. “Everyone still needs to turn the lights on and turn the heat on.”

Discretionary spending tends to get tighter during times of economic woe, but utilities are non-discretionary. Lydon sees utilities as a “safe haven” during troubled times.

XLU is not only performing above its 200-day moving average, but it’s also up 10% YTD. The last week has seen the fund go up 2%. “It’s been pretty consistent throughout the year,” Lydon said.

Inflation is also bringing prices up, which could be good news for utilities, especially against the backdrop of increased energy demand amid supply chain constraints and the Russia/Ukraine war. Lydon noted that though energy is somewhat stable in the U.S., XLU has companies that operate out of Europe.

With a solid dividend yield of 3% and investors starved for income outside of the fixed income space, XLU can help portfolios in that way as well.