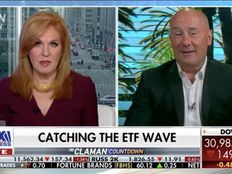 VettaFi’s Tom Lydon appeared on Fox Business with Liz Claman to discuss the strength of the dollar and the unusual markets, which have been closing at their lowest levels since mid-July.

With the markets taking a series of blows throughout the week, Claman asked Lydon which ETFs had a shot at performing well amid the “weird atmosphere.” Given that baskets of securities, such as ETFs, can help investors catch sector waves, Lydon had some notes of optimism to play in what could otherwise be a gloomy melody.

Lydon said, “ETF flows can tell you a lot. We’ve seen over $400 billion in new money come in this year. We’re on track for the second-biggest year of flows. At a time when equity and fixed income have been challenged, it’s very telling.”

Lydon sees a lot of flows back into small caps. “When you look at small-caps there are some advantages because they are nimble and not affected by falling foreign currencies. They do most of their business in the US.” Because U.S. dollar strength is solid, small-caps also have the flexibility to purchase services overseas with the dollar going farther than it would otherwise. Lydon flagged the iShares Russell 2000 ETF (IWM A-) as a small-cap fund that could be positioned to ride a small-cap wave.

Lydon also thinks utilities are a potential play, as they tend to outperform the market during recessions. The Utilities Select Sector SPDR Fund (XLU A) is up on the year. Lydon noted, “people are always going to pay for water, pay for recycling, pay for gas, pay for electric, pay for sewer. It’s not something we can get rid of.”

The dollar’s strength is evident in the performance of the Invesco DB US Dollar Index Bullish Fund (UUP B). Lydon sees this trend as continuing, given Europe’s energy situation and general uncertainty. Lydon noted that investors turn to safe-haven assets like the dollar when things are uncertain.

As Investors Move Back Into Tech, Look Into RYT

Crypto May Lower Transaction Costs in Some Countries

Despite the Noise, ESG is Gaining Popularity

Protect Against Inflation With Real Assets

A Rising Tax Environment? What to Watch Out For

Among Emerging Markets, India Is Intriguing