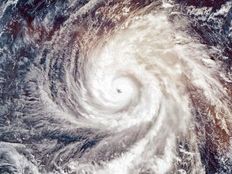 Hurricane Ian made landfall on the Florida coast on September 28, 2022, and became one of the largest, deadliest, and costliest hurricanes seen in the U.S. Many of these hurricanes have also occurred relatively recently including Ida (2021), Michael (2018), Harvey, Irma, and Maria (2017), Sandy (2012), Ike (2008), and Katrina (2005). This aligns with a worldwide increase in natural disasters seen in recent years. Globally, there have been 350-500 medium- and large-scale disasters per year in 2001-2020 compared to 90-100 to 1970 to 2000. Projections assume the number of disasters may increase to as much as 560 by 2030.(1) Although it is difficult to predict with certainty the number of natural disasters that will occur in the future, it is essential to reduce the large economic impacts that stem from these disasters. Even a single natural disaster can cause billions of dollars in economic damage and contribute to a slowdown in national GDP. The VettaFi Natural Disaster Recovery and Mitigation Index to track the companies that are the driving force behind natural disaster mitigation and adaptation including companies with government contracts for natural disaster response, home improvement retailers, and companies engaged in emergency/backup power generators and batteries. VFFEMA has outperformed its starting universe of developed global equities (the S-Network Developed World Equity 5000 Index [SNDW5K]) since its March 20, 2020 inception date, including significant outperformance during the past few days following Hurricane Ian.

Even a single natural disaster can cause billions of dollars of damage and have a widespread impact on the economy.

Economic estimates from Hurricane Ian vary, but most estimates place Ian near the costliest hurricanes including Katrina, Harvey, Maria, Sandy, and Ida. Hurricane Katrina has so far been the costliest U.S. hurricane with over $180 billion in economic damages (adjusted for inflation), while Harvey and Maria cost about $150 billion and $100 billion, respectively. On average, insurance and risk companies are estimating that Ian could cost anywhere between $40 billion to $100 billion.(2) Estimates vary drastically because it is difficult to define how far the economic damage can reach. For example, there are more obvious effects of wind and storm damage on homes and businesses, damage to infrastructure like roads and powerlines, and clean up costs. There are also the extended impacts on agriculture, tourism, and increased supply chain costs from greater demand for lumber and flatbed trucking. These factors are not just isolated to affected regions but have larger geographic reach and are more difficult to measure.

It is almost impossible to prevent certain natural disasters, but companies within VFEEMA contribute to minimizing damage and speeding up recovery.

While it is almost impossible to prevent certain natural disasters from occurring, it is possible to reduce the economic costs from natural disasters. Although Ian will likely be one of the costliest hurricanes, industry estimates predict it may fall below the costs of the major hurricanes mentioned above. This can be partially attributed to increased technology and growth of companies that contribute to rebuilding and recovery efforts. For example, Maxar Technologies (MAXR) is a satellite company that has provided event imagery of Florida and the southern U.S. coastline during Hurricane Ian. These images are distributed through the company’s open data program, where first responders and disaster relief organizations like Red Cross and Team Rubicon can access imagery to assess damages in out of reach areas.(3) Home improvement retailers can also play a significant role in rebuilding homes and businesses so that economic activity and daily life can resume after a large storm. Companies like Home Depot (HD) and Lowe’s Companies (LOW) provide preparation materials like plywood, generators, or tarps which can reduce damage from the storm. After the storm, these companies continue to provide recovery/clean up materials for several months. More efficient operations and wider footprints (including stores in the Florida and southeast coast) contribute to faster recovery and rebuilding times, which can reduce the total economic impact. Home improvement retailer stock prices have recently reflected their large role in natural disaster mitigation and recovery—all outperforming the S&P 500 Index (SPX) during the past week (the SPX was up 3.9% during the same time period).