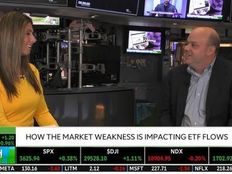 Todd Rosenbluth Has a Value-able Talk on TD Ameritrade

This year, value has outperformed growth throughout 2022, but Petallides wonders if that trend is likely to continue.

During the tech boom, growth seized favor, but that advantage has very much slipped away. Rosenbluth noted several value funds that are doing well, including the iShares S&P 500 Value ETF (IVE A). IVE and VTV both have exposure to profitable companies like JPMorgan and Proctor & Gamble. “These ETFs are constructed based on the largest companies having a higher weighting within the overall portfolio,” Rosenbluth said, though he pointed to other value ETFs that have some different angles on value, including the actively managed Avantis U.S. Large Cap Value ETF (AVLV B-) from American Century. “We don’t see a lot of actively managed equity ETFs, and when we do, they tend to be focused on growth,” Rosenbluth observed, calling AVLV the “polar opposite” of the ARK Innovation ETF (ARKK B+).

For a value approach that isn’t as centered on cap size, Rosenbluth mentioned the Invesco S&P 500® Pure Value ETF (RPV B+), which gets some of the deepest value cuts in the S&P 500. RPV puts the value orientation ahead of size consideration, holding many energy names. The iShares Russell 2000 Value ETF (IWN A-), meanwhile, gives advisors more exposure to up-and-coming companies that are out of favor.

Instead of moving into cash, investors are also looking at ultra-short term ETFs such as the SPDR Bloomberg 1-3 Month T-Bill ETF (BIL B+) and the JPMorgan Ultra-Short Income ETF (JPST A). “We’re seeing investors more comfortable looking at cash-like ETFs than they ever did beforehand.”