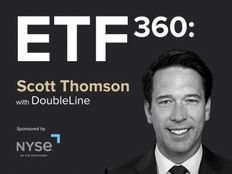 In the latest episode of ETF 360, VettaFi head of research Todd Rosenbluth is joined by DoubleLine’s Scott Thomson to discuss the newest ETFs from DoubleLine, the DoubleLine Shiller CAPE U.S. Equities ETF (CAPE A-) and the DoubleLine Opportunistic Bond ETF (DBND ).

“We launched our ETF business in March of this year,” Thomson said, noting that though DoubleLine has collaborated on ETFs with State Street, these new ETFs are meant to deliver their active platform to investors in a standalone format.

Bringing An Active Approach to Bonds

With their long history of active management, Thomson thinks its products have the capacity to stand out. “DBND, the DoubleLine Opportunistic Bond ETF, is an expression of our core fixed income solution for investors. It is actively managed. It is benchmarked against the Bloomberg U.S. Aggregate Index, and really we’re seeking to outperform over the cycle,” said Thomson. He continued, “That’s marrying the top down with the bottom up in terms of duration, credit, curve, sector, currency – really, we’re blending all of those together to find the most attractive relative opportunities.”

He noted that, in comparison, a passive strategy would not allocate to the most worthy but instead to the most indebted issuers. “That’s something we think investors should consider.”

“CAPE is a natural extension of our existing partnership with Barclays and Professor Robert Shiller. It’s a pure expression of the Shiller-Barclays US Sector Total Return Index,” Thomson said.

According to Thomson, CAPE’s response from investors has been positive. Since its inception back in March, CAPE has generated 200 basis points of alpha and raised nearly $80 million.