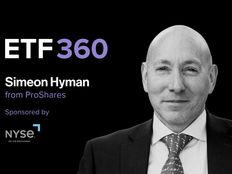 In the most recent episode of “ETF 360,” VettaFi head of research Todd Rosenbluth is joined by ProShares head of investment strategy group Simeon Hyman, CFA to discuss ex-sector ETFs tied to the S&P 500.

Advisors typically take a broad approach when it comes to investing in the S&P 500, but Rosenbluth noted that “what you own and what you don’t own is also important.”

Hyman concurred and said, “There’s always some part of the market that’s substantially outperforming, but there are also, frequently, as we know, areas of the market that may very well underperform.” Being able to invest in the S&P 500 but leave something out creates a unique opportunity, underscoring how what investors remove from the table can be just as vital as what they leave on the table when it comes to driving returns.

As an example, Hyman pointed to energy’s stellar performance, saying it’s “through the roof.” Partially driven by high gas prices, the energy sector has outperformed the broader market. By contrast, technology is on “the bottom of the heap,” according to Hyman.

There are other use cases for these funds, which can act as diversifiers in the event a portfolio is already concentrated in one direction or another. “What if I work in that healthcare sector,” Hyman said, continuing, “I might have a pile of options, or it might just be my salary and bonus that are tied to the fortunes of that sector. Eliminating it from my investment portfolio can be a good way of balancing my entire basket of both human and financial capital.”

Given the strength of energy lately and rough period for tech, Hyman thinks investors may want to consider where they feel things are heading. If they believe the energy bull run is powering down, then SPXE might be a compelling pick. Meanwhile, if they think tech is entering a longer bear market, then SPXT could be worth a look.