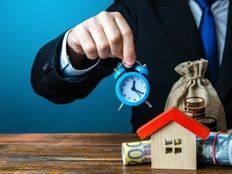 A lot of people have been looking for places to park amid the wonky markets.

“Here’s the good news, with the Fed hiking interest rates, even short-term Treasuries are now paying something that’s worthwhile,” Lydon said, noting that not long ago, money market funds were paying next to nothing. Lydon continued, “Now in short-term, short-duration bond funds, you can actually get a decent yield out there — along with market stability.”

JPST has seen billions in inflows, with $4 billion in new money this year alone. Rising rate environments are particularly interesting for short-term bonds, as Lydon pointed out, “As rates rise, the value of current bonds go down because the new issue bonds that go out into the market place are yielding more.” Lydon also observed that shorter-duration bonds, by nature of being held for a shorter amount of time, are not as susceptible to the fluctuations in bond value as rates change.

According to Lydon, “When you look at the performance of JPST over time, the one thing that jumps out at you is, over the last year, we’ve seen an improved yield, and number two, the net asset value of this ETF has remained consistent over the past five years.”

Jaffe pointed out that investors still have a bit of a difficult choice here. On one hand, they are getting a better yield here. On the other hand, it is not a better real return after inflation.

Lydon conceded, “That’s something we have to accept. Most people who are allocating to CDs, Treasuries, money market funds, short-duration bond funds, have money that they can’t — they really, really can’t lose.” He noted that the only alternative is to get really aggressive and go into high yield or commodities, but if the purpose is to save for something that must happen, like a wedding or home down payment, the fluctuations of other strategies put the principal at risk.

Asked by Jaffe of there is a benefit to “diversifying parking places,” Lydon said, “Not all short-term bond funds are created equal.” Managers have a number of possible moves they can make, so even within the universe of short-term fixed income, there is going to be a diversity of tactics employed. “The good thing here is, the Fed has been pretty clear about their path toward rising interest rates,” Lydon observed. He also noted the yield could be north of 4% or 4.5% if interest rates start dropping. If rates start dropping, that will also indicate that inflation has come down, further strengthening that yield.

“I think the key thing here is understanding [how] rates work and understanding how they affect bonds,” Lydon said. JPST makes an interesting choice for investors with money on the sidelines that they want to keep safe but get some kind of yield.