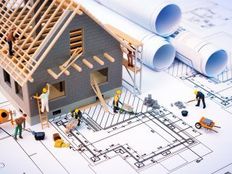 “There’s been a lot of conversation about inflation, mortgage rates are going up with interest rates, the average investor out there probably feels the home construction market is going to be really challenged,” Lydon said before noting that ITB is actually above its 200-day moving average. This might seem unusual for anyone looking at the current market environment, where housing seems like it could be flashing all sorts of warning signs.

Jaffe observed that though it may be the ETF of this week, it was also the ETF of last week with an impressive 13% performance bump. Lydon doesn’t think this is an accident.

“What happened last week,” he asked, teasing out the big CPI news. Lydon believes that if we’ve seen the top of inflation, there’s a chance the Fed could start pulling back interest rates, especially if a recession becomes apparent. “That might be some of the indications we’re seeing here as far as home construction; it’s really a good indicator,” Lydon noted. Rents have been surging, and consumer homes have been unable to meet demand. Home construction could be a huge benefactor with rates coming down and that demand remaining persistent.

In prolonged periods of widespread decline, it can be interesting to see where rallies take hold. According to Lydon, “there were a lot of areas of the market that were storming last week, but not many were up 13%.”

Home Construction Surge a Head Fake or Not?

Pure plays on home construction do face some risk, in that the recent trends could be a head fake, but as Jaffe noted, ITB isn’t a pure play. It has Home Depot and Lowes among its holdings.

“If you are a trend follower, if you’ve got some money on the sidelines, if you want to be against the norm, this might be the opportunity to put something to work,” Lydon said, noting that if it is a head fake and it rolls over its recent gains, then investors receive little harm. But if it’s about to start a run, then investors have a shot to get in at a low.

Lydon and Jaffe see this as a very contrarian trend play. Lydon observed, “last time we had a meaningful downturn in the market, and we had a recession, home prices plummeted 30%.” But he noted that the market solidified subsequently and that things aren’t quite the same as they were back then.