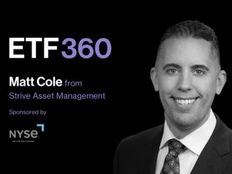 DRLL, which debuted in August, was Strive’s first exchange traded fund and was followed by six more ETFs. The rookie ETF follows the Solactive United States Energy Regulated Capped Index and could be an appropriately timed option because, for the second consecutive year, energy ranks as the best-performing sector in the S&P 500.

“Energy companies have become massively profitable over the past year,” said Cole. “In the most recent quarter, Exxon was actually more profitable than Google (Alphabet). Rewind just a year ago, that wasn’t the case at all.”

Underscoring the point that DRLL could be at the right place at the right time among new ETFs is the point that fundamentals are turning in favor of the energy sector. That includes issues that were previously headwinds for the group and tailwinds for growth stocks as well as sector-specific catalysts.

As Strive’s Cole points out, the factors that propelled growth stocks higher from 2009 through 2021 — including fiscal stimulus, low interest rates and inflation, and easy monetary policy — reversed this year. Now, with 2023 right around the corner, the energy sector and ETFs such as DRLL could be appealing to tactical investors.

“We see potential for an increase, still, 2x–3x relative to the tech sector over the next several years,” added Cole. “Secular trends and outperformance or underperformance between the energy sector and tech sector have typically been 10-year trends.”

In other words, energy’s outperformance of tech could still be in its early innings, indicating that DRLL has the potential to reward long-term investors.

As experienced investors know, energy equities, including DRLL components, are often beholden to supply/demand dynamics. Supplies have been constrained in the U.S., and while sales from the strategic petroleum reserve (SPR) may have contributed to crude prices retreating from the June highs, Cole noted there are factors that stoke demand, leading to higher prices in the process.

Those include the possibility of China — the world’s largest oil consumer — shedding its zero-COVID policy.

Cole added that with oil in the $80 per barrel range, that’s high enough for most exploration and production companies to maintain profitability.