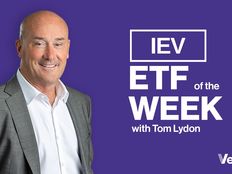 VettaFi’s vice chairman Tom Lydon discussed the iShares Europe ETF (IEV A-) on this week’s “ETF of the Week” podcast with Chuck Jaffe of Money Life.

According to Lydon, despite a decline in equity markets around the world, IEV is solid trend-following opportunity. “You look at long term trends, this is a classic example of an ETF that represents a developed area of the world that for the first time in a long time has gone above its trendline.”

With an energy crisis brewing in Europe, slowed economies, and the Russian invasion of Ukraine, IEV might not jump to mind right away. Lydon noted that interest rates and the dollar are poised to stabilize, both of which could help the Euro, and in turn the equity markets, in Europe.

Lydon also sees IEV has a useful diversifier. “A lot of people who have been heavily allocated to the S&P 500 have looked for other equity areas to be in. The sectors that are most important here in this ETF are financial services, healthcare, industrials, and consumer defense; where if you had a high correlation to the S&P you were mostly allocated to technology, financial services, healthcare yes – but consumer cyclicals. It makes sense to diversify outside the US.”

Home country bias has worked out for many U.S. investors, but Lydon notes that the pendulum might swing in the other direction. Jaffe and Lydon both think its worth thinking about currencies as well. Lydon observed, “If you look at the fluctuations of currencies, they have had a big effect on stocks.”

Domestic investors who own European stocks can find the value of their stocks impacted when the Euro tumbles, considering that they would have to convert that value back to the dollar. “If the dollar is stronger, you are losing valuation there,” said Lydon. This means that the dollars recent retreat after a period of dominance could breathe fresh life into European equities. IEV is up 10% in the last month, and if the Euro gains strength that’ll boost the value of the fund even higher. “I’m not sure you are going to have these kind of valuation opportunities, especially as an uptrend is developing.”