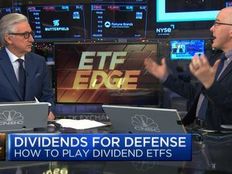 On the latest ETF Edge hosted by Bob Pisani, VettaFi Financial Futurist Dave Nadig and Schwab’s DJ Tierney discussed how ETFs can be used for repositioning in a variety of ways, including tax loss harvesting.

According to Nadig, “this is the perfect year to do this. One of the biggest problems with tax loss harvesting is we had a great run and it was hard to find those moments to sell.” Though Pisani noted there is a limit of what you can do. “You can’t book millions and millions of dollars of losses and never pay taxes again,” Nadig quipped.

There is also a huge amount of dispersion, according to Nadig. Companies like Tesla are down over 50% while other companies are seeing positive returns. “Its not impossible that might have some great trading gains you want to offset with some of those longer term positions.”

Dividends have also been a hot topic this year, with ETFs such as the Schwab US Dividend Equity ETF (SCHD A) showing healthy inflows. According to Tierney, “the space has done well.” He noted that dividend strategies have been the strongest category by record.

Nadig sees dividend funds like SCHD as defensive equities well built for this particular kind of market, and VettaFi polling indicates that allocating resources to dividends has been a top tactic for dealing with inflation. Additionally, dividend payers, despite a shaky earnings season, kept their dividends strong. “96% of dividend payers kept them flat or increased them in the third quarter,” Nadig observed. “Nobody likes it when the dividend gets cut.”

What Happened to TIPS?

TIPS were a popular inflation hedge in 2019 and 2020, creating a massive inflow into TIPS ETFs like the Schwab U.S. TIPS ETF (SCHP A). Tierney said that TIPS saw big inflows as investors began sweating inflation, but have recently the pendulum has started swinging the other way despite that, Tierney said, “they might make more sense now than the did a year or two years ago.”

Nadig said that TIPS are notoriously difficult for even the best traders to time out correctly. He said, “the old adage is by the time you decided to make a trade in TIPS, either in or out, it’s over.” But Nadig concurred with Tierney that now is a great time to kick the tires on TIPS. “The break even on the 10 year TIP is 2.3%, which means you have to believe that inflation is going to average less than 2.3% to choose a straight treasury over the ten year TIPS. I think that’s a pretty good bet right now.”

Value Having a Moment

With growth taking a pounding in 2022, value has emerged as the stronger player in equities. Inflows and performance in value has been strong. Nadig noted that a number of value products “have done what they said on the tin.”

Tierney agreed, noting that a number of Schwab’s value products such as Schwab U.S. Large-Cap Value ETF (SCHV A) have seen flows.

Vanguard is approaching Blackrock for the most assets under management. “They tend to be, if not the cheapest, very cheap in every place they are competing,” said Nadig. Tierney concurred, noting that Vanguard does a lot right and praising his own company for offering a good alternative.