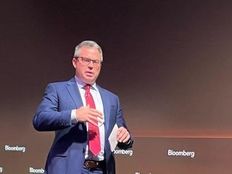 Eric Balchunas Says 2022 the Best Year Ever for the ETF

Bloomberg’s Eric Balchunas kicked off ETFs in Depth – The Next Wave of Innovation by talking about 2022 as the best year ever for the ETF. This big year comes despite larger market headwinds, such as inflation.

“The reason inflation matters is because it matters to voters,” Balchunas said, outlining inflation as the biggest topic of 2023.

Despite a stock market down 16%, ETFs had their second-biggest year of flows ever. Last year the market was up 27%, so flows were easier to come by. Because of this, Balchunas sees this as the biggest year for ETFs on record.

“We’re getting bigger and bigger fish using ETFs,” Balchunas noted, with institutions continuing to dive into ETFs. He believes this trend will continue in the coming year. Despite this year’s wild markets, over 400 ETFs launched. Typically issuers are reticent to launch products when markets are down. “We do think closures will pick up, but that’s healthy,” said Balchunas.

Mutual funds have struggled in comparison, losing 5 trillion in assets this year. $1 trillion of those losses comes from flows, the rest of it comes from cratering markets. This has led to ETFs increasing their market share. ETFs currently have 28% of the assets that mutual funds have. Balchunas sees that as increasing even higher and eventually surpassing 50%.

“Funds only own 40% of the stock market,” according to Balchunas. Within that 40%, Vanguard and Blackrock sit heads and tails above the rest, with 34.8% of total flows going to Vanguard over the past five years, and 31.5% going to iShares. The next largest was just 7.5%, which went to State Street. “We predict Vanguard will be the biggest ETF issuer in about a year and a half.” Vanguard currently has 27.1% of the market share among ETF issuers.

Balchunas doesn’t see the top three relinquishing their command any time soon, but there is likely to be a lot of movement on the rest of the board, with newcomers like Avantis having huge years.

Given the amount of control Vanguard and Blackrock have among stocks in the S&P 500, Balchunas thinks that corporate governance groups need to cede voting choices to their investors. He noted that pilot programs are in the works around giving investors more of a say in the proxy voting.

If you rank every sector by assets, thematics are second place behind only tech. Balchunas and Bloomberg are bullish on thematics. “Themes are chameleons – they aren’t just growth and tech.”

“’Sell the rip’ is the new ‘buy the dip,’” Balchunas noted, speaking to the rise of leveraged and single stock ETFs. Making a tactical investment to ride a peaking stock on the way down is becoming an increasingly frequent strategy, and Balchunas sees that as likely to continue in the next few years.

Though a majority of portfolios tend to be vanilla, many investors have about 15% of their portfolio devoted to what Balchunas joking refers to as “hot sauce.” “The bigger passive gets, the crazier thematics will become.”

“The most underrated advantage of ETFs is convenience.”