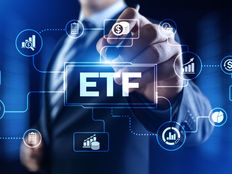 Blackrock’s Salim Ramji, global head of iShares and index investments appeared with Bloomberg News anchor Scarlet Fu in the keynote for the ETFs In Depth conference.

Taking a big-picture look at the industry, Fu pointed to today’s massive equities sell-off and asked Ramji how ETFs have managed to be so successful in such a challenging year. “For all the success ETFs have had in the 32 years they’ve been around, it’s still a tiny portion of the overall securities market in which we operate.” He sees ETFs as benefitting from reallocations from other securities around the market. “As you see more volatility around the marketplace for securities, you’re seeing more investors look to ETFs for stability.”

Ramji said that he thinks that over half of iShares inflows are coming from securities. He noted that bond ETFs, in particular, has huge potential, “nine out of 10 of the largest bond managers in the world use our ETFs.” He noted that last year was a record year for bond trade and this year did 45%-50% better. He says bond ETFs are benefitting from innovative technology. “We’re seeing tight spreads, low cost, and high liquidity – in contrast to the bond market itself,” Ramji noted.

Fu pointed out that bond ETFs can trade on certain holidays that bonds can’t, such as Veteran’s Day.

“You’re seeing clients all over the world go through bond ETFs. It’s the great equalizer,” Ramji said, praising the bond ETF as both a modern approach to the once antiquated fixed income space and as a way for investors to easily access bonds without having to go through enormous amounts of research and process.

Many clients were initially skeptical about bond ETFs, claiming they won’t hold up in times of true volatility. Time has proven them wrong, according to Ramji, who observed that many skeptics were invested in the way things used to work. He compared the bond ETF space today to how equity ETFs were in the aughts, coming onto the scene in a big way with lots of fresh potential and momentum.

Pivoting to other asset classes, such as water futures, Ramji said their water commodity products are largely focused on pure equities, but noted that “over time it will evolve,” and the space will have more and more products.

Ramji wants to see more ETFs take advantage of the wrapper itself. Since ETFs are still 1/7th of the size of the mutual fund market, he’s excited to see it become the wrapper of choice and the innovation that will breed as ETFs grow.

Pointing to iShares bond products, Ramji observed that, “with the change in the rate environment, you can build really good customized bond ladders.” Bond ETFs help investors navigate the hidden fees and sometimes byzantine nature of the bond space.

Ramji believes that transparent ETFs have won out against other types. “Transparency has won. You see it in the flows.”

The ESG Question Closes Out Keynote

Fu brought up ESG, noting that Blackrock has received criticism from both the right and left regarding its use of ESG products. From the left, Blackrock faces criticism over its exposures to things like coal, while the right protests its ESG holdings. “What we do is we provide greater choice,” Ramji said, observing that different clients have different demands, and Blackrock aims to provide them with choice.

He said it isn’t his place to make broad sweeping decisions. Blackrock’s duty is to its investors as both a matter of principle and, more importantly, as a matter of law. He noted that he offers a chance for investors of Blackrock to vote for the shares they own through iShares. “We’re an asset manager, we’re not an asset owner.”